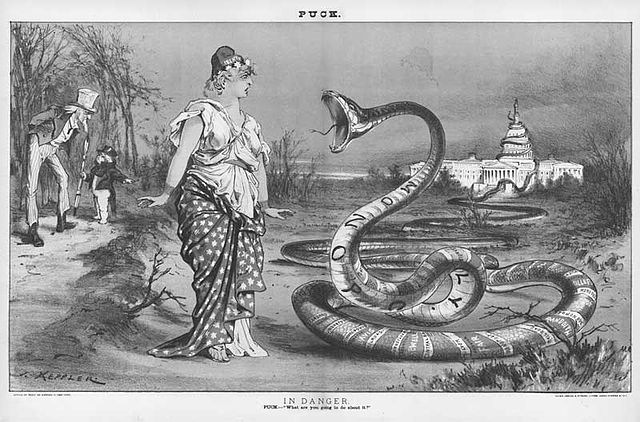 For a "progressive" presidential candidate, US Senator Elizabeth Warren (D-MA) is remarkably, well, conservative. Her proposals are neither new nor of the "democratic socialist" variety. In fact, her aim is, as Matthew Yglesias puts it at Vox, "to save capitalism" with stock proposals from the first half of the last century.

Much of her campaign platform co-opts Franklin Delano Roosevelt's 1930s "New Deal" emphasis on social welfare, job creation, infrastructure, and highly progressive taxation to pay for it all solutions she considers proven, for problems she considers similar.

Her latest proposal, though, takes an earlier Roosevelt as its model. Like "Trust Buster" Teddy Roosevelt, she wants to use regulation and antitrust enforcement to "break up monopolies and promote competitive markets." Her initially announced targets for the idea included Facebook, Google, and Amazon. A couple of days later, she added Apple to the list.

Interestingly, in her search for monopolies to slay, she ignores the biggest, most powerful, and most lucrative monopoly in America: The US government.

In 2020, the federal government expects revenues of about $3.4 trillion.

And then there's market share. No one really has to do business with Facebook, Google, Amazon, or Apple. There are numerous alternatives to the offerings of each, and many consumers choose those alternatives.

Uncle Sugar, on the other hand, boasts 100% market share for his offerings. You're required to be his paying customer whether you like it or not. Many of the alternatives are outright illegal, and among the ones that aren't, you're required to pay for them in addition to, not instead of, the federal government's services.

That's the very definition of "monopoly." And it's the monopoly Elizabeth Warren wants to serve as CEO of.

Is Senator Warren is serious about "breaking up monopolies" and "promoting competitive markets?"

If so, I look forward to her proposal for breaking up the federal government and allowing real alternatives to compete for its market share.

A good start would be 100% federal tax deductibility for the purchase of private sector services that replace the government's offerings, or a pro rata clawback for binding agreement to not use a particular government service.

Absent such a proposal, seems to me she's just another greedy monopolist looking to suppress the competition.

Related Topic(s): Elizabeth Warren; Monopoly, Add Tags
Add to My Group(s)
Go To Commenting
The views expressed herein are the sole responsibility of the author and do not necessarily reflect those of this website or its editors.