"If they skip it, I imagine there's going to be... a lot of anger," says Jeanne Harris, a nurse from Los Angeles 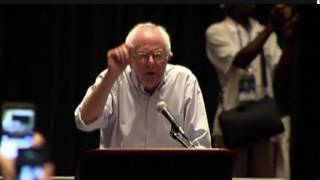 Bernie Sanders' name will be placed in nomination and there will be a full roll-call vote on the Democratic National Convention (DNC) floor on Tuesday night, according to reports.

The Los Angeles Timesnoted Monday that Sanders supporters "fanned out across Philadelphia on Monday morning, collecting signatures to ensure the Vermont senator gets a roll call vote on the convention floor."

"At the Rhode Island delegation breakfast this morning, a volunteer from Pennsylvania was circulating among the tables collecting some of the required 600 delegate names. 'It's so that there can be a roll call vote, so people can actually say if they're for Bernie Sanders,' said Lauren Niedel, a Sanders delegate and one of the leaders of the Sanders movement in Rhode Island."

According to a separate LA Times report:

"Whether a roll call will be taken to nominate Clinton has been a topic of negotiations between the Sanders and Clinton campaigns. Eight years ago, after the last contentious Democratic primary, the vote was theatrically interrupted by Clinton, asking for unanimous support of then-Sen. Barack Obama.

"Sanders backers are wary of attempts to prevent them from voicing their support for their chosen candidate."

"If they skip it, I imagine there's going to be... a lot of anger," Jeanne Harris, a nurse from Los Angeles, told the paper.

After Sanders spoke to roughly 1,900 delegates on Monday, his wife Jane Sanders approached the podium and was caught on the still-live microphone telling her husband: "They don't know your name is being put in nomination, and that's the concern..."

commondreams.org is a progressive publisher
Related Topic(s): Bernie Sanders; Delegates; Democratic; Hillary Clinton; Voter Participation, Add Tags
Add to My Group(s)
Go To Commenting
The views expressed herein are the sole responsibility of the author and do not necessarily reflect those of this website or its editors.