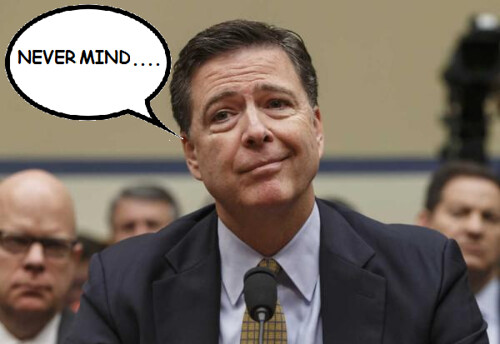 On Jan. 12, 2017, former FBI Director James Comey attested to the Foreign Intelligence Surveillance Court that the now-discredited information from former British spy Christopher Steele regarding Russian collusion had been "verified." Thanks to an FOIA request, we now have documentary evidence showing Comey pressing ahead to validate Steele amid a distinct lack of enthusiasm on the part of other agency heads. Clearly, the latter were reluctant to push Steele's salacious storytelling, lest they throw additional doubt on their own threadbare tales of Trump's collusion with Russia.

Comey wanted to use Steele's reporting to buttress an already flaw-filled FBI filing for a warrant to prolong eavesdropping on Carter Page. (Page was a foreign policy adviser who began working with the Trump campaign in March 2016.). Trouble is that on the same day (Jan. 12, 2017) that Comey told the FISA Court that Steele's reporting was "verified," Comey emailed then-National Intelligence Director James Clapper admitting that the FBI was "not able to sufficiently corroborate the [Steele's] reporting."

If you find it difficult to reconcile those two statements, you are not alone. Was Steele's reporting "verified"? Or was it uncorroborated? How to explain.

Comey was hell-bent on renewing the original (October 21, 2016 ) 90-day warrant he signed to surveil Carter Page. And if that required morphing "uncorroborated" into "verified," no big deal? The rubber-stamp FISA judge would be none the wiser, and who knows what juicy tidbits might turn up in that surveillance.

Comey's email to Clapper betrays concern that his colleague intelligence gurus might not want to go out on the shaky Steele limb. Comey knew of the pungent odor in which Steele's reporting was widely held/smelled. So, in an effort to head off unnecessary trouble, in his email, Comey suggested, "... it may not be best to say 'The IC [Intelligence Community] has not made any judgment that the information in the [Steele] document is reliable.'"

What Comey knew is that Clapper and CIA Director John Brennan were equally determined to avoid adding the Steele fiasco to the list of other smelly irons they had in the fire. As things turned out, Comey's demurral about what his colleagues should say about Steele came too late.

In his email explanation to Comey, Clapper said "I apologize for not running this by you ...We caucused this afternoon and decided I should call the president-elect...I spoke to him for 20 minutes and expressed my profound dismay at the leaks that have been appearing in the press ... I told him I do not believe these leaks are coming from the Intelligence Community (sic)." (Buzzfeed had published the Steele dossier on Jan. 10.). Was it actually profound dismay Clapper felt, or more likely crocodile tears?

As for Steele's reporting, Clapper told Comey that he had already given the offending sentence to the media; namely, "The IC has not made any judgment that the information in the [Steele] document is reliable" - the wording that Comey wanted changed - and that CNN had "already picked it up""

So What's the Big Deal About Carter Page?

Carter Page was simply low hanging fruit -- a target of opportunity because he was known to have had contacts with Russians; he was easy pickings. Trump and higher-ups were the real target. As explained below, snoopers could get at Trump and others by getting just one warrant -- on whatever flimsy grounds.

The "evidence" used by Comey and his "folks" to "justify" the FISA warrants included not only Page's known contacts with Russian officials (even though CIA had told the FBI from the outset that those contacts had been approved), but also the phony-as-a-three-dollar-bill "Steele dossier."

The first FISA warrant renewal application, signed by Comey on Jan. 12, 2017, shows him determined to attempt to spy on Trump and his associates after Trump had become president-elect and then president. At a Senate hearing on Sept. 30, 2020, Sen. Lindsey Graham gave a chronological rundown of the evidence that Comey and his "folks" either knew, or should have known, so that by signing fraudulent FISA warrant applications they were perpetrating fraud on the court.

The original FBI application for a FISA warrant on Carter Page was dated Oct. 21, 2016. The three renewal applications were on January 12, April 7, and June 29, 2017. A different FISC judge considered each application and issued the requested orders, collectively resulting in about 11 months of FISA coverage targeting Carter Page from October 21, 2016, to September 22, 2017.

Ray McGovern works with Tell the Word, the publishing arm of the ecumenical Church of the Saviour in inner-city Washington. He was an Army infantry/intelligence officer and then a CIA analyst for 27 years, and is now on the Steering Group of Veteran Intelligence Professionals for Sanity (VIPS). His (more...)
Related Topic(s): Comey Interview; FOIA; Intelligence; Putin; Russia; Trump, Add Tags
Add to My Group(s)
Go To Commenting
The views expressed herein are the sole responsibility of the author and do not necessarily reflect those of this website or its editors.