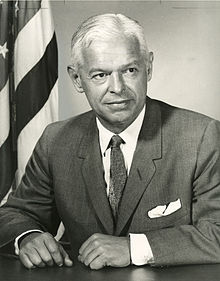 In his farewell speech on January 17, 1961, President Dwight Eisenhower warned of the Military Industrial Complex (MIC). The birth of this monster can be traced to National Security Council document 68, NSC-68, submitted to Harry S. Truman on April 14, 1950. The document was top secret then and remained so until 1975. Its main author was Paul Nitze, a prosperous and highly educated investment banker unknown to the general public. He summarized an elite consensus that in effect turned the United States decisively away from its New Deal social programs, to endless military buildup. At the end of World War II, was in danger of falling back into the Depression, especially since overseas trading customers were made impoverished by the war. A Keynesian stimulus was needed, but the elite implicitly wanted spending on military and weapons of war over public works. To win Congressional and public support, it was necessary to exaggerate the 'Soviet threat."

But Communism was never a serious threat to Western Europe other than the Soviet-occupied buffer zone in Eastern Europe. It was not a military threat, for under Stalin, the Soviet Union had abandoned the doctrine of "permanent revolution," although the exiled Trotsky protested. The Soviet Union was now concentrating on reconstruction from the devastation of the war and on building defenses against further aggression it feared from the capitalist West. NSC-68 claimed that the USSR was still led by a "fanatic faith," to "Impose its absolute authority over the rest of the world."

Pentagon contracts thus became the life blood of the U.S. economy, affecting every Congressional district and virtually every activity, mostly in universities, which welcomed the great inflow of grants, ignoring the ramifications of the strings attached.

Without any public discussion, NSC-68 set the cultural course of the United States for generations to come. The "Cold War" had already been announced in 1947 in a speech in South Carolina by Bernard Baruch, who used the alleged Communist threat as his argument against the wave of post war labor demands. He called for unity between labor and management, longer workweeks, and no strike pledges from unions, "since today we are in the midst of a cold war."

This guise of the overblown "Soviet threat" was orchestrated to pump Congressional appropriations into the Pentagon and to control the labor movement, using guilt by association with an American Communist Party which was never a threat to anything but the racial segregation in the South.

The NSC-68 Cold war dominated U.S. foreign policy without serious challenge until Mikhail Gorbachev ended it, with his decisive move for peace, using the single symbol of the fall of the Berlin Wall, in June 1989, which sealed Moscow's abandonment of the German Democratic Republic, and allowed German reunification.

America today, with the specious claim of Russia rigging American elections, and with the hypocritical hubris of American exceptionalism, still carries out the craven, amoral policies of NSC-68, that aspires to command the world. CIA and Pentagon cancerous corporate capitalism is killing not only nations, but it is killing all nobility of the human spirit. It is killing the ability to grasp the truth of the human condition, it is killing the respect for the defiance of the brave, for all of us who imagine that we can save the world.

There is little public resistance today to the wars started by the War Party, that Biden has always backed, because they hardly seem like real wars. The use of drones controlled remotely from North Dakota and Nevada has removed the stark horrors and murder of "boots on the ground" and the post- traumatic stress syndrome suffered by veterans. Drone war is increasingly safe, distant and invisible, and has become a branch of the entertainment industry, something to hear about but rarely seen.

We need to correct our ideological fog, the tyranny of oil, which was created by an immoral elite behind closed doors, which has used dire warnings of an external "threat" to vanquish any possible democratic debate on the humane direction the nation should take.

We need to create a develop and grow the Peoples' Party that is non-partisan and cross-partisan. The Peoples' Party will rally all of us who have had enough of a War Party, and another president like Biden, who judged by his past voting record and actions, is just a softer more palliative iteration of the war mongering right wing neocons and humanitarian hypocrites, continuing to act out the despicable legacy of NSC-68.

"It is only in showing men the truth," wrote Baron d'Holbach in 1772, during the Age of Enlightenment. "Then they will come to know their most vital interests and the true motives which should incline them towards what is good. For the less people know, the more obdurate they are in upholding what they think they know."