On September 8, 2021, the Los Angeles Unified School District (LAUSD) board scheduled a Special Board Meeting so that they could "conference with Legal Counsel" about "anticipated litigation." While the Brown Act allows these types of meetings to be held in closed sessions, the public entity must first hear comments from the public. The following are the prepared remarks that I delivered to the members of the board:

Before the board ducks behind closed doors to discuss anticipated ligation with your team of lawyers, I thought I would take the opportunity to suggest a couple of topics for you to discuss. Maybe out of view of the public, your counsel can set you on the right path so that education funds can be used to educate students rather than pay court costs.

The first thing you should discuss is the district's responsibility to hold charter schools responsible not only to the law but to the rules that this board has implemented. I am very concerned that these are not being enforced uniformly, opening the LAUSD to lawsuits by charter school organizations who have done what they were supposed to while others were allowed to ignore their responsibilities.

One example of this is the over $12 million that is owed to the district as of July 13, 2021, for over-allocation penalties. While schools like Girls Athletic Leadership School, Magnolia Science Academy, and Prepa Tec Los Angeles High have paid their bills, Celerity Charter Schools and their successors owe the district $771,428.28. I guess they were too busy paying for their former Executive Director's chauffeured limo rides to and from school to worry about paying their debt to our district's students. KIPP can afford to build a school on top of a toxic waste site, but cannot pay their debt of $44,087.85. The Citizens of the World chain of charter schools owes the district almost $1 million but was still given more rooms at Shirley Avenue Elementary School. Are the schools that paid what is owed to the district just suckers?

The Charter School Division's lack of enforcement also opens the district to legal claims from parents of the 80% of students who attend LAUSD public schools. Once again, Citizens of the World provides the example, prompting a side question: Is this nationwide chain of publicly funded private schools following any rules?

In the charter petition for their latest franchise, Citizens of the World specified the intersection of Sherman Way and Ranchito Avenue as the center point of the community they would serve. The Charter School Division's Director, Jose' Cole-Gutie'rrez, has gone before this board and defined a "community" as having a three-mile radius. This definition was ignored when his department allowed the school to open up outside this three-mile boundary in Valley Village, a neighborhood that was not named in their charter petition.

In emails responding to the concerns of public school parents, Cole-Gutie'rrez has redefined "community" to include the entire East San Fernando Valley. This is an area of neighborhoods that is vastly different, both demographically and socioeconomically. Furthermore, this area was not included in the original description of the service area as Colfax Elementary School was not one of the schools listed as being affected even though it is located less than a mile from the campus of Citizens of the World. Even though the petitioner is required to "consider the existing District and charter schools operating within the"three-mile radius", Dixie Canyon Elementary School was also not included.

This charter chain has repeatedly had benchmarks added to their charter renewals that are supposed to increase the diversity of their student bodies, but year after year the schools fail without facing any consequence from the Charter School Division. While taking rooms used for services desperately needed by students that have the odds stacked against them, Citizens of the World serves a student body that is much more privileged on the very same campus:

We need to do something about this before it ends up in more litigation. 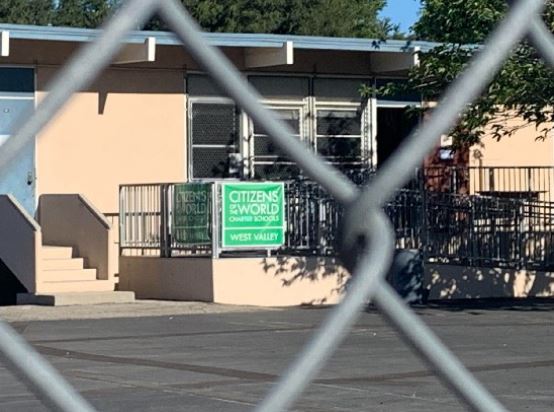 (Image by Carl J. Petersen)   Details   DMCA
After my comments, the board recessed into a closed session beyond the prying eyes of the meddlesome public. It will, therefore, never be known if they addressed these concerns. However, there are 18.6 million reasons to suggest that they were ignored.