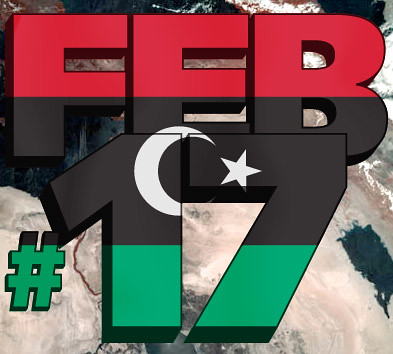 Libyans are mobilizing for a "Day of Rage" today on February 17. Protesters in the early afternoon, according to a member of the Libyan Youth Movement, were reported to be moving to the Security Headquarters in Benghazi. The protests are said to be gaining numbers and are headed for Maydan al Shajara once more, a location that had been the site of gunfire and petrol bombs.

The same individual also reports shortages of medical supplies at Al Bayda hospital and urges international health organizations to help out. And the movement member shared reports of people in Benghazi managed to chase away "pro-government Gaddafi thugs" by throwing rocks at them.

Many in Libya believed ahead of the "Day of Rage" that the Gaddafi regime was planning to threaten Libyans with live fire and the targeting of family members if they participated in anti-government protests. Also, it was reported that Gaddafi was having government employees go protest at pro-Gaddafi rallies, and, if they refused, they would be fired.

Cables released on Libya provide context for the protests that are unfolding. 09TRIPOLI192 from February 2009 titled, "For Ordinary Libyans, It's the Economy Stupid," breaks down what might be frustrating Libyans and why Egypt may have been just what they needed to be inspired to take action. The cable suggests Libyans are more interested in economic democracy, not political democracy:

Ordinary Libyans, frustrated by privations during the country's isolation under sanctions and exhausted by decades of largely failed political adventurism under the rubric of Muammar al-Qadhafi's al-Fateh Revolution, appear to care more about economic reform than political change. Historically entrepeneurial, al-Qadhafi's revolution had been a "poor fit" for most Libyans. The lifting of sanctions and nascent economic reforms were a welcome relief; however, the increasing disparity between what Libyans saw and wanted to buy and what they could afford (the majority are still employed by the government) has remained a problem. Static state salaries and inflation, particularly with respect to prices for food and key staples, have hit ordinary Libyans hard in the last two years. The tendency of greedy regime elites to monopolize the most lucrative market sectors has had political consequences, and the pervasive culture of rent-seeking that evolved during the sanctions period, together with conspicuous consumption by regime elites, has not sat well with the silent majority of Libyans, who remain socially conservative. The fact that many young men are forced by lack of means to delay marriage is another pressing economic issue in a conservative society in which marriage is a key social anchor and indicator of status. Embassy contacts in Tripoli, Benghazi and Tobruk were cautiously optimistic about proposals for wealth distribution and continued economic reform, but less sanguine about proposed government re-structuring and political change. Despite talk of a possible constitution and perhaps even elections, Libyans are mostly sober-minded about the prospect and likely pace of political change, at least while Muammar al-Qadhafi remains alive and in control. But they are cautiously optimistic that the limited economic reforms that have been undertaken to date will continue, and that their salaries will somehow increase enough to allow them to enjoy more of the consumer goods that they were largely deprived of for more than 20 years

The sheer level of repression that the Gaddafi regime exacts on the people of Libya is largely what leads the diplomat who wrote this cable to conclude Libyans are largely uninterested in a political revolution. A person, whose name is redacted, is quoted saying, "Do not give us free speech, parties, a constitution or elections - give us the ability to make and freely spend money." Later on in the cable, another whose name is redacted, says, "I don't give a damn about politics," and when asked about "proposed government re-structuring" he suggests that the regime is "a police state" that cannot be expected to willingly concede political authority."

The cable highlights a chief concern as a result of poverty in the largely conservative society is that Libyans are no longer earning enough money to get married. Marriage, an important "social anchor and bellwether of worth," is creating "worrying social consequences."

That same month in 2009, "Basic People's Congresses" (BPCs) were held. Five hundred low level councils deliberated over two key proposals put forward by the Gaddafi regime: the distribution of Libya's oil wealth directly to the people and the dismantling of most government ministries.

A cable on the two measures, 09TRIPOLI186 , illuminates what happened after "the Leader" or Muammar al-Gaddafi appeared before cameras and stated, "Libyans, this is your historic opportunity to take your oil wealth, power and full freedom."

The 468 BPCs then began their deliberations, which were played live on Libyan radio throughout the week. The GOL extended the BPCs one day to February 23 after the wealth distribution question proved so contentious that other agenda items, including the government restructuring initiative, were left no time for debate. Local observers say the Congresses have been largely inconclusive and are "in a muddle". Foreign journalists on a tightly controlled tour of the BPCs were surprised to see what they described as genuine opposition to al-Qadhafi's plan, and noted that many Libyans complained that they were being asked to decide on plans bereft of details and without knowledge of how the plans would impact the Libyan economy. Even basic questions such as how the funds would be dispersed in a country that remains a cash economy with little access to commercial banking have gone unanswered. The most commonly-heard objection was that distributing large payments directly to the entire population would cause serious inflation. Yusuf Sawani, Director of Saif al-Islam al-Qadhafi's Qadhafi Development Foundation, told the DCM his impression was that "the weight of opinion" was against supporting wealth distribution. The 468 BPCs represent the lowest level of a three-tiered direct representation scheme (ref C) and the recommendations of the BPCs will next pass to regional councils -- "Sha'abiyat" -- before being presented to the national-level General People's Congress (expected to meet March 2).

The appeal to populism is characterized by the author of this cable as a move that was "intended to distance himself from the widely-criticized corruption and inefficiency in the government." The strong opposition is said to have come from "prominent technocrats as well as self-interested officials who stand to lose influence if government ministries are abolished."

The cable concludes that most Libyans would "forgo oil money in exchange for a functioning, relatively honest government that provided decent salaries, education and health care."

According to The Economist's "Shoe Thrower's Index," Libya is the second-most unstable country. It has a corruption ranking of 146 out of 178.

Libyan government is known by the term "Jamahiriya," which was coined to describe the direct democracy without political parties that exists in Libya. Basic People's Congresses have representatives that meet in a General People's Congress (GPC). As one might expect, it is easier to have wide-ranging debates and address problems at the lower level than it is at a higher level in the GPC.

As the aforementioned cables indicate, up to this point Libyans' expectations for change have been lowered to the level of only desiring a marginally better day-to-day quality of life. But with the events that have unfolded in Tunisia and Egypt, that mindset is shifting.

Kevin Gosztola is managing editor of Shadowproof Press. He also produces and co-hosts the weekly podcast, "Unauthorized Disclosure." He was an editor for OpEdNews.com
Related Topic(s): Cablegate; Corruption; Democracy; Libya; Muamar Al Gaddafi; Repression; Revolution; Wikileaks, Add Tags
Add to My Group(s)
Go To Commenting
The views expressed herein are the sole responsibility of the author and do not necessarily reflect those of this website or its editors.