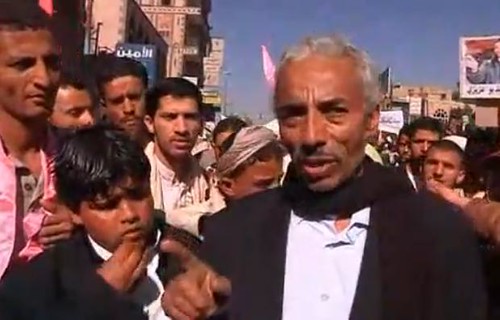 While Egyptians continue to maintain their uprising against President Hosni Mubarak with a "Day of Departure" on February 4, it is worth looking at what happened in Yemen yesterday. An opposition coalition of Yemenis mobilized in defiance of a plea from President Ali Abdullah Saleh to not protest, rally or engage in any sit-ins, and held their own "Day of Rage."

The protests were considered to be the largest anti-government demonstration that Saleh has "faced in his 32-year rule." The Guardian reported protesters chanted, "Together we fight against poverty, corruption and injustice." Given what has been happening in Egypt, the protesters hoped to mobilize in their Tahrir Square, but the government "beat them" to the Square and sent "hundreds of tribesmen to camp out there overnight."

Protesters called for Saleh to "form a new government" and "let the Yemeni people decide who will rule them in clean, fair elections."

WikiLeaks cables released on February 3 reveal why Yemenis might be mounting a revolution. In cable 05SANAA1790 from June 28, 2005, called "Priorities for Washington Visit: Saleh Needs to Be Part of the Solution." A section on "Democratic Elections" is particularly illuminating:

Saleh touts Yemen as a leader in regional reform and has committed to democratization. Domestically, however, he has run-out of reforms he can implement at no political cost to himself. Increasingly anxious about upcoming Presidential elections, and already preoccupied with succession, it is unlikely Saleh will allow a viable opposition candidate to challenge him in 2006. The visit is an opportunity to pressure Saleh not to amend the constitution so he may run again in 2013 by praising him for bringing Yemen to the point where he can rely on the system in place to produce a legitimate successor. The inducement here might be a public show of support via a greater role in public fora such as the G-8.

The cable points to "significant progress" in the U.S. relationship with Yemen. The progress referred to seems solely contingent on Yemen's ability to counter "terrorism" or al Qaeda elements in the country:

Significant progress has been made in our relationship with Yemen in the past four years. The ROYG has arrested and tried perpetrators of the USS Cole and VM Limburg attacks, shared GWOT-related information, collaborated in the capture of AQ suspects and helped uncover plots against U.S. and other western interests in Yemen. On the economic and political reform front, Yemen has conducted reasonably free and fair Parliamentary and local council elections, taken an active role in regional and international democratic reform efforts, including BMENA and the Community of Democracies; backed IMF/WB sponsored economic reforms, and committed to seeking MCC membership.

However, it appears the US overlooked the magnitude of poverty and state repression in the country, as there is no prediction on whether the people might rise up in opposition to Saleh.

The Millennium Challenge Corporation (MCC) membership cited is "a U.S. Government agency that works with developing countries for the promotion of good governance, economic freedom and investment, in this instance, through its Millennium Challenge Threshold Program." The program has tried for the past five years to award $20 million in grant funding to Yemen but has postponed the award at least twice because Yemen was found to not be meeting a number of "thresholds."

The Center notes, "On November 28, 2005, Yemen became the first country suspended by the MCC for a deterioration in performance, as measured by the indicators." More than half of a decade later, Yemen is still doing an abysmal job of ruling justly and investing in its people and that is why Yemenis (like other countries in North Africa and the Middle East) are revolting against their government.

News organizations like NPR have reported since the revolt in Tunisia that Saleh has "ordered income taxes slashed in half and instructed his government to control prices" and "deployed anti-riot police and soldiers to several key areas in the capital and its surroundings to prevent riots." But those moves have not stopped protests from taking place.

As highlighted in a previous post, Saleh has brutally neglected the needs of his people. According to NPR, "Nearly half of Yemen's population live below the poverty line of $2 a day and doesn't have access to proper sanitation. Less then a tenth of the roads are paved. Tens of thousands have been displaced from their homes by conflict, flooding the cities."

Kevin Gosztola is managing editor of Shadowproof Press. He also produces and co-hosts the weekly podcast, "Unauthorized Disclosure." He was an editor for OpEdNews.com
Related Topic(s): Cablegate; Middle East; Military; Poverty; Protest; Terrorism; Wikileaks; Yemen, Add Tags
Add to My Group(s)
Go To Commenting
The views expressed herein are the sole responsibility of the author and do not necessarily reflect those of this website or its editors.