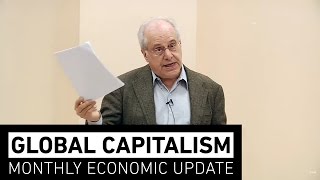 Global Capitalism February 2017: Nationalism & Scapegoating Foreigners Please SUBSCRIBE to our channel to get video updates from Democracy at Work! Special thanks to this month's anonymous donor from North Redington, FL.
(Image by YouTube, Channel: Democracy At Work)   Details   DMCA

Professor Richard Wolff: "Why the Rich (corporations and wealthy individuals) Can and Should Pay More in Taxes," first uploaded on December 9, 2011 at YouTube. This video was updated when the transcription was added to it on March 30, 2017.

Global Capitalism February 2017: Nationalism & Scapegoating Foreigners Please SUBSCRIBE to our channel to get video updates from Democracy at Work! Special thanks to this month's anonymous donor from North Redington, FL.
(Image by YouTube, Channel: Democracy At Work)   Details   DMCA

This video is 5 minutes, 33 seconds long. Roger Copple, the transcriber of the updated video is providing the same transcription in paragraph form below.

I want to talk today about why it makes good cents to tax the rich amongst us, particularly corporations and wealthy individuals. Let me begin by--kind of the end of the story. We ought to tax them because we used to. We used to do really well in the United States, just 30 or 40 years ago when we taxed corporations a great deal more than we do now, and we taxed the rich a great deal more than we do now. In the 50s and 60s, this country was growing at a faster clip than it is now. We had fewer unemployed than we have now, and we paid the price of taxing our corporations and the rich.

So when I propose that, I am not proposing something new. I am actually proposing to go back to a time not long ago, when we managed these affairs better and more fairly than we do now. Let me explain. At the end of World War II, the federal government relied for most of its taxes on income taxes--taxing the incomes of individuals, but also taxing the incomes of corporations. In those years we relied very heavily on taxes on corporations: the federal government got more money from them than it got from individuals.

Today the relationship is completely changed. We only get 25 cents from corporations for every dollar in income tax we take from individuals. There has been a massive 40-year shift--the burden of taxes off of corporations and onto individuals. We ought to think about that. But at the same time, among individuals who are carrying more and more of the burden, there has also been a shift. In the 50s and 60s, the highest income tax rate charged to the richest amongst us--get ready--91 percent! For every dollar over $100,000 that a rich American earned in the 50s and 60s, that person had to give Uncle Sam 91 cents and only got to keep 9 cents.

Even in the 1970s, when it was brought down, the tax on the rich was still 70 percent. Out of every dollar over $100,000 they earned, 70 cents went to Uncle Sam; they kept 30. What is it today? 35 percent! Out of every dollar over the top bracket that the rich American pays, he or she now gives Uncle Sam 35 cents and keeps 65 cents to themselves. [The] bottom line: Over the last 40 years, the burden of the income tax, the most important source of revenue for the federal government, has shifted from corporations to individuals, and among individuals from the richest [individuals] to all the rest of us.

We have had 30-40 years of something that could and should be called "class war"--the war of the class of corporations and the rich, which has succeeded for them in putting the burden of taxation on us. We are not a country that is overly taxed. The overall tax rate of the United States compared with other countries in Europe puts us at the low end, not at the upper end. Most advanced industrial countries tax their people more than what we do. But we are very unique in putting such a disproportionate burden on to the middle and lower income people in the United States.

A recent think tank in Washington (Institute for Policy Studies) did a little calculation: What would happen to the American deficit, the enormous gap between what our government spends and what it takes in revenue these days, if we just went back to the 50s, 60s, and 70s, if we taxed corporations the way we once did, and we taxed the rich the way we once did? Answer? Most of our deficit, not all, but most of it, would disappear! The government would have raised the revenue that it needs, and it wouldn't have to borrow, putting our future generations in the need to pay the interest on these huge debts. So it would make a lot of sense as well as be fairer if we changed our tax structure back to what it was, when, again, we were growing faster and had fewer unemployed people.

Last Point: Those who oppose this constantly tell us if you tax the corporations and the rich then they won't have the money to create jobs, to invest. This is a mistake in economics. It's possible that a corporation or rich person who does not pay taxes will take that money and create jobs--that's possible--but these days it is not happening--and there is no necessity for it to happen.

A corporation or a rich person who doesn't pay taxes can use the money instead to pay bonuses to executives and to raise [their] salaries. It could use the money to invest okay but in another country, creating jobs over there, not over here. And here is something else rich people and corporations can do, and they are doing this year 2011. They're taking the money they don't pay in taxes, and they are using it to cover the deficit. That is, they lend it to the federal government. Since the government does not tax them, it has to borrow and they're the people--the corporations and the rich--with the money to lend to the government.

How nice for them! Instead of being taxed, they get to give that same money to the government as a loan--requiring the government to pay it back plus pay the interest. That is not fair. That is not efficient. That has nothing to do with jobs. That is pandering to the richest amongst us. It doesn't make economic sense, and it is grossly unfair. (Transcribed by Roger Copple, 3/30/2017)

Related Topic(s): Corporations; Economics; Future; Government; Policy; Rich People; Taxes, Add Tags
Add to My Group(s)
Go To Commenting
The views expressed herein are the sole responsibility of the author and do not necessarily reflect those of this website or its editors.