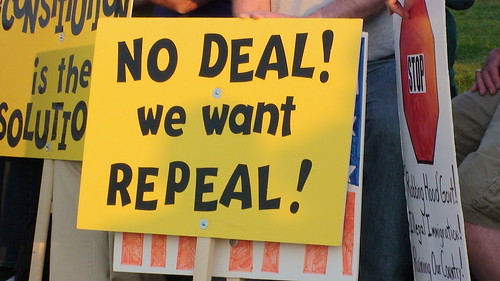 The answer has 3 parts:

1. The origins of "Obamacare"

3. The Dilemma of throwing out the baby with the bathwater

Let's start with the origins of what is now known, with great irony for those who understand the origins of the ACA, as Obamacare. The twin pillars of this plan are a mandate to obtain insurance and subsidies for those who cannot afford it. This plan was originally published by the Koch-funded Heritage Foundation in 1989.

Republicans came up with the plan first described by Stuart Butler in a publication for the right-wing Heritage Foundation in 1989. And it was, with even greater irony, the Heritage Foundation which fought "Obamacare, " claiming the ACA was in no way similar to its 1989 plan.

Here is the text from the Butler plan:

"All citizens should be guaranteed access to affordable healthcare."

"Direct and indirect government assistance should be concentrated on those who need it most. "

From this right to healthcare and the mandate to obtain it, the concept of government subsidies was inevitable.

The items in the ACA which are not included in the Heritage Plan are precisely those which the public approves.

Tho the ACA remains unpopular, by a small margin (a few polls have showed a slight approval), when asked about specific features, most Americans approve of them and the overall thrust of public opinion is not for repeal but for improvement.

If we look at the polls, the number who want to keep the ACA or expand it is a robust majority.

Related Topic(s): Healthcare; Healthcare Costs; Healthcare Providers; Money; Obamacare; Polls; Progressives; Repeal; Replacement; Republican Party Of No; (more...) Uninsured, Add Tags  (less...)
Add to My Group(s)
Go To Commenting
The views expressed herein are the sole responsibility of the author and do not necessarily reflect those of this website or its editors.