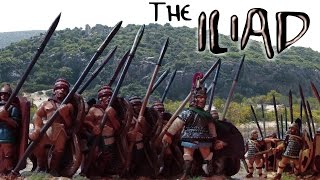 Today, perhaps more so than at any time in history, we are experiencing a divide between what is considered to be the "domain" or "confinement" of art as wholly separate from the domain of "politics."

The irony of such a perception is its failure to recognise that the root of our political system was enjoined with the arts from its very inception.

Looking at ancient Egypt and Athens, mythos was dominant in all spheres of thought. Mythos, which pertains to anything transmitted by word of mouth, i.e. fables, legends, narratives, tales etc., would often hold within it a significant truth or meaning for the society as a whole. In other words, ideas that were pervasive in these cultures and shaped all aspects of life including its politics and sciences were shaped by mythoi, or the art of story-telling.

Homer's great poems that are left to us today, The Iliad and The Odyssey, describe the events of the Trojan War and its immediate aftermath, events which marked the descent of Greece into a dark age. Following the Trojan War, approx. 1190 BCE, the civilization of mainland Greece collapsed, written language was lost, cities disappeared.

The Iliad and The Odyssey, written around 700 BCE heralded the reversal of the collapse, and the beginnings of Classical Greek culture.

These epic stories of Homer which had been passed down through the centuries by poet bards who had memorised entire texts, would travel all throughout Greece and recount these tales. These "stories" became a dominant cultural reference point for all of Greece and beyond, and are greatly influential to this day.

As Shelley wrote in his "A Defense of Poetry":

The poems of Homer and his contemporaries were the delight of infant Greece; they were the elements of that social system which is the column upon which all succeeding civilization has reposed. Homer embodied the ideal perfection of his age in human character"

Aeschylus (523-456 BCE), Sophocles (497-406 BCE) and Euripides (480-406 BCE) are considered to be the three greatest Greek tragedians. Greek tragedy competitions would be held between three different playwrights (selected half a year before), who were required to compose three tragedies and one satyr play each. The Greek tragedy festivities were second only to the Athletic competitions.

The Greek tragedies were not just for entertainment but often would contain a warning for those who did not heed the ill-fated decisions of its characters. Often, epic stories from the distant past would be selected due to their relevance to a present day situation or conflict. Much like during the time of Shakespeare, one could not simply criticize a war or a conduct of a specific ruling or influential group, but rather the dramatist would pick characters from either a fictional world or a distant past to showcase a foretelling. To reveal a truth that has remained hidden.

One could argue, those were simpler times, in today's calculating and information-dominated world we cannot afford such fanciful, inexact thinking within the realm of "politics". Well I would argue that this in fact only increases the urgency of art's reintroduction into the realm of "reality" so to speak.

For example, have you ever searched for something, stubbornly staring at a specific area you were certain you left the item, but it is not there. You then proceed to rummage through your entire house, and then upon returning to that same spot, you realise, that the item you were looking for was always there? It was in fact right in front of you, but for some inexplicable reason, you could not "see" it at the time.

Well, in short, poetry gives us that ability to "see" something that has remained hidden from us.

Related Topic(s): Arts; Homer; Poetry; Politics; Tragedy, Add Tags
Add to My Group(s)
Go To Commenting
The views expressed herein are the sole responsibility of the author and do not necessarily reflect those of this website or its editors.