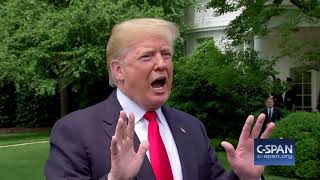 Doubling and tripling down on his bigoted commentary and racist tweets, Donald Trump is all but boasting that his re-election run will be fueled by hate speech and hardcore white grievance. Unlike anything ever seen before in American politics (remember, segregationist George Wallace didn't have a Twitter feed), Trump's re-election strategy is to basically spark a rhetorical race war. It would be nice if the news media had the courage to say so, but it's clear that today's overwhelmingly white political press corps is not up to the challenge. It's a press corps that's tentatively treating the ugly specter of tribal racism as if it's just another wedge issue used to motivate voting blocs.

Already bullied by Trump, the D.C. press, which won't so much as label him a liar in its news pages, even though he's on pace to tell more than 16,000 lies as president, is ill-equipped to handle the looming challenge. Covering and confronting an openly racist presidential candidate requires confidence and courage, neither of which the halting Beltway press has been advertising in abundance during the Trump era.

Even outspoken Trump critics in the press who routinely hold him accountable admit to being concerned about what's coming. "We had a meeting about this @TheLastWord," MSNBC's Lawrence O'Donnell tweeted this week. "I began & ended with the admission that I don't know how to cover a presidential campaign of full throttle racism. We must begin by not pretending we know how to cover Trump. It's a new challenge everyday & our old tools don't work."

Recent coverage of Trump's racists escapades (such as demanding that congresswomen of color "go back" to where they came from and likening predominantly black American cities to rodent-infested hellholes) has highlighted the media's shortcomings, and that, as O'Donnell noted, the old tools don't work. This is especially true at a time when Beltway newsrooms lack diversity.

"The cable news media needs to stop treating Trump's racism like they are debating a proposed tax plan or budget deal," warned Sirius/XM host Dean Obeidallah. "There are NOT two sides to Trump's white supremacy. It's vile and it's inciting death threats against communities of color. Period!"

Related Topic(s): Presstitutes; Racist Depopulation; Trump Racism; Trump Racist, Add Tags
Add to My Group(s)
Go To Commenting
The views expressed herein are the sole responsibility of the author and do not necessarily reflect those of this website or its editors.