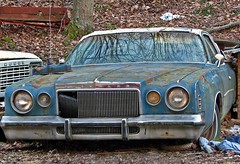 Chrysler in a Hollow by dok1

Then what? We pack it in and collect our left over chips and move on. What else is there?

How, can we assume the ongoing responsibility of law and the orderly repayment of debt in a non-ongoing concern whose stated legal goal is to not make a profit? Where will this money come from?

Rightfully, nobody - and that is why the company is declared insolvent. But, in these federal bailouts we the taxpaying citizen are asked to believe that we are going to 'earn a profit' from a non-ongoing concern and from that some how we are going to obey the law of orderly debt and repayment. But, HOW? There is no legal commitment from the debt riddled insolvent company now in chapter 11 to ever 'earn a profit' ever again. So, where is this money ever going to come from?

Us, We the Tax Paying People!

But, why? Would I, EVER, invest my hard earned dollars in an insolvent and bankrupt company. I would not, ever. So given a choice the answer is simply No. I would not repay the debt of a company that does not legally have the right to ever earn another profit ever again. Let me invest my hard earned currency then in, let's say, 'Fiat.' A company who does still have the legal right, mandate and obligation to it's shareholders to legally turn a profit in the day to to day environment of an 'ongoing' concern.

Why as a President do I want to wrap up my nations money in non-ongoing concerns and eventually repay debts to lenders with money not ever earned by the company I am supposed to be bailing out. This money then is not ever, ever, ever going to be legally able to ever return a profit from which I can satisfy the rule of law and orderly repayment of debt without always having to incur yet another debt; which money then must have to come from somewhere lest I disobey the law and not bother to ever repay the lender anyways; which is theft.

It is a ridiculous thought and mere politics trumping the real business solution. Which is, if Chrysler/Fiat can come up with a solution to the Chrysler problem of insolvency then why not simply address the financial needs of Fiat.

And, Mr. President, thereby invest my hard earned tax paying dollars in a company that is not in chapter 11 bankruptcy but is a Solvent and Ongoing Concern from which I can expect to lawfully repay debt from my profits earned. Which I am then entitled to legally as a shareholder of an ongoing business concern with the motivation to earn a profit and not a sucker with a handful of shares in a now legally defunct and legally bankrupt company which has no such obligation; to ever even return a profit let alone assume it's debt.

In other words why not 'invest' in FIAT and not 'bailout' CHRYSLER.

I studied english in college amongst various other disciplines. I also enjoy global warming science. Please visit my website for more details.
Related Topic(s): Bailout; Bankruptcy; Change; Choice; Chrysler; Dollar; Fiat; Insolvency; Investigations; Investing; (more...) Investing Investments; Investors; Money; Money; Politics, Add Tags  (less...)
Add to My Group(s)
Go To Commenting
The views expressed herein are the sole responsibility of the author and do not necessarily reflect those of this website or its editors.

Why not invest in Fiat instead