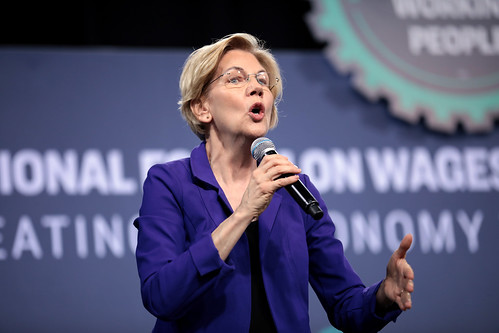 It turns out the media's obsession with the super-rich isn't confined to the world of celebrity and entertainment. In politics, the press also seems utterly fascinated with how the 0.1% live, and especially what their political leanings are. For the 2020 campaign, that means a barrage of coverage about what Wall Street bankers and billionaires think about Elizabeth Warren and her populist agenda. They don't trust her! Some like her! Some won't donate! On and on it goes, as the press scurries to document the opinions of the super-wealthy, but there's no explanation for why they're supposed to matter so much.

"From corporate boardrooms to breakfast meetings, investor conferences to charity galas, Ms. Warren's rise in the Democratic primary polls is rattling bankers, investors and their affluent clients, who see in the Massachusetts senator a formidable opponent who could damage not only their industry but their way of life," read a typical passage from The New York Times recently, as the press continues to be deeply fascinated with what the financial community thinks of the Democratic nominee, and keeps treating financial opinions as important political news.

"As Warren Gains in Race, Wall Street Sounds the Alarm"

"In a Pick-Your-Poison Election, Wall Street Likes Warren Over Trump"

"Elizabeth Warren is winning grudging respect among some on Wall Street"

"Warren Would Take Billionaires Down a Few Billion Pegs"

The never-ending emphasis sends a clear message that the votes and donations of Wall Street bankers and billionaires matter more than other people's. But they don't. It's reminiscent of the media's 2016 campaign obsession with coal miners, followed close by its obsession with those who have manufacturing jobs, which sent the obvious signal that white working-class male voters were the ones who counted the most.

Related Topic(s): Billionaires; Donations; Elizabeth Warren; Media; Politics; Presstitutes; Wall Street; Wall Street Driven Journalism, Add Tags
Add to My Group(s)
Go To Commenting
The views expressed herein are the sole responsibility of the author and do not necessarily reflect those of this website or its editors.