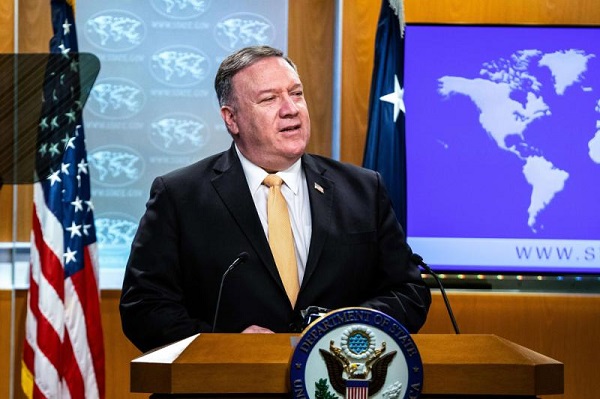 As part of its battle against Covid-19, Israel has closed it borders to foreigners and imposed a two-week quarantine on anyone entering the country. There are also strict requirements to wear masks in public places.

Israel, however, has thrown the rules and caution to the wind in approving the arrival on Wednesday of the one of the world's most powerful statesmen.

It seems strange timing with the world hunkered down for the US Secretary of State, Mike Pompeo, to be making an urgent, lightning visit to a tiny country in the Middle East. But then Israel-US relations have never been normal.

Pompeo's arrival has been preceded by assurances that no one will be put in danger. The one-day visit would be "highly choreographed" to ensure it was "very, very safe", a senior medical adviser told the media on the weekend.

One might wonder why given the need for a medical team, for screening beforehand of the flight crew and state department staff, and for Israel's intricate arrangements to ensure social distancing it is so important right now for Pompeo to meet in person the Israeli Prime Minister, Benjamin Netanyahu.

Could they not have just chatted on a secure phone line and avoided all the hullabaloo?

It may not be entirely coincidental that Pompeo's visit comes the day before Netanyahu's fourth consecutive government will be sworn in after a year of inconclusive Israeli elections.

Pompeo will be able to congratulate him in person, as well as Netanyahu's adversary-turned-coalition partner Benny Gantz, a former general who will serve as defence minister. Gantz is expected to become prime minister in 18 months' time under a rotation agreement approved by Israel's Supreme Court last week.

Now with a parliamentary majority, Netanyahu is keen to forge ahead with his long-delayed political priorities while Donald Trump is still in the White House and offering a near-blank cheque.

Trump, meanwhile, wants Israel in lockstep with his own priorities as he takes on the presumed Democratic challenger, Joe Biden, in November's presidential election.

With his handling of the Covid-19 pandemic coming in for increasingly tough criticism, Trump will need all his electoral bases shored up. Keeping Netanyahu happy will be key to bringing out the fervently pro-Israel, Christian evangelical vote that helped him win in 2016.

Top of the pair's official agenda are discussions about the pandemic and Iran's influence on the region. But Israeli media have been full of reports that even more prominent will be talks about annexation of the West Bank.

Regarding Iran, both wish to see its influence diminished, and are determined to prevent a stringent sanctions regime being eased on humanitarian grounds, as Tehran struggles against a mounting death toll from the virus. Both are also gearing up for a campaign to renew an arms embargo on Iran when it expires in October.

But things get trickier in relation to Syria, Israel's northern neighbour, where Iran is in a contest with Russia for influence over Damascus.