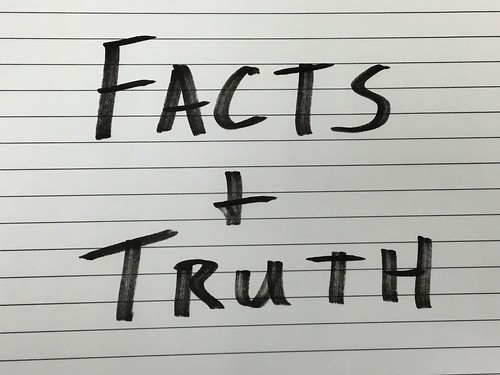 Offering facts during an argument doesn't convince people because we usually don't develop our beliefs through thorough investigation. We all have over-beliefs that shape our other beliefs. And the major political propagandists in our country know and use this very effectively.

"Over-belief is a philosophical term for a belief adopted that requires more evidence than one presently has. Generally, acts of over-belief are justified on emotional need or faith, and a need to make sense of personal experience, rather than on empirical evidence.

"This idea originates from the works of William James in his book The Varieties of Religious Experience and refers to the conceptual framework that individuals have." [1]

This phenomenon called over-belief is at the core of the dilemmas that we face in interpersonal interactions with people who are culturally different, as in our political discourse today.

An example might help. Although he called them frames, George Lakoff [2] gave us a look at the idea of an over-belief present in our society's different expectations for government in his books, including Moral Politics, Don't Think of an Elephant, The Political Mind, and Whose Freedom?

"In these books, the strict father model is contrasted with the nurturant parent model. Lakoff argues that if the metaphor of nation as family and government as parent is used, then conservative politics correspond to the strict father model. For example, conservatives think that adults should refrain from looking to the government for assistance lest they become dependent." [3] Our over-belief in a strict father or nurturant parent then colors every other subsequent belief.

Whatever one's over-beliefs, they require more evidence than we possess to justify them. Yes, we can point to statistically inadequate examples and generalize them to create the illusion that we're correct. And most of us do. But even though, we don't have the evidence to justify the beliefs we need to make sense of our personal emotional experience.

The larger question is, how do we moderate the negative effect this is having on our nation? We've all learned that offering contradictory facts doesn't work. Because the over-belief exists without the need for or despite the facts or evidence.

I think a better way would be to acknowledge each other's over-beliefs as a way of meeting people in some mutually agreeable emotional space so something productive might happen. In short-hand, start with an agreement.

It costs nothing to acknowledge another person's point of view, even if you passionately disagree with it. Acknowledgment is not agreement. And the only chance we have of influencing each other is to continue to dialog. Mutual influence is the essence of politics in a democratic society.

If we can recognize we all have over-beliefs that cannot stand the test of facts and data and see they are connected to our sense of well-being, we may have an opening for productive dialog. Until then, we'll stay stuck in the current paralysis that infects our political narrative. And while we do, the politicians are serving the needs of those who pay for their campaigns without regard for the needs of the people they're elected to serve.

We are being played like a giant piano because they know exactly what tune to play to keep us distracted. And it sounds a lot like our over-beliefs.

Related Topic(s): Agreement; Argument; Belief; Conservatives; Effect; Family; Illusion; People; Politicians; Politics, Add Tags
Add to My Group(s)
Go To Commenting
The views expressed herein are the sole responsibility of the author and do not necessarily reflect those of this website or its editors.