While death counts from COVID were rising exponentially, the CDC published charts that highlighted the danger. Now that the daily death toll is down to 1/10 the peak April rate, the CDC has stopped publishing the numbers. I couldn't find them anywhere on the CDC site. 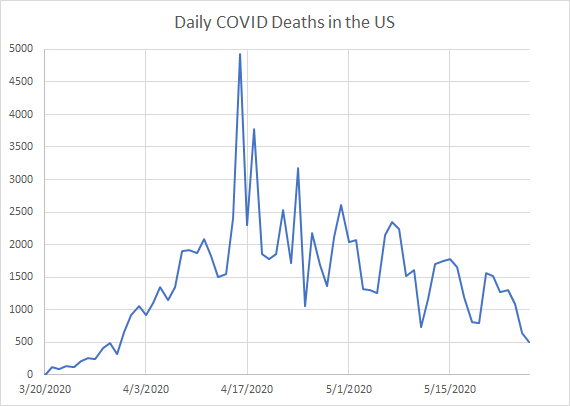 There were government "scientists" making projections based on the exponential rise, as if it would continue exponentially until it infected us all. But exponential expansion is characteristic of the beginning stage of an epidemic. Sooner or later, it hits a wall. Growth slows, the curve peaks, a decline begins. In America, the exponential phase lasted 3 weeks, March 1 through March 22.

The daily death toll from COVID has been declining since its peak on April 16 at 4,928 deaths. Yesterday's count was 500, and the average of the last week was 880. But the count of new cases has come down much more slowly. We might expect that the count of new cases should peak about 3 weeks before the count of deaths, since this is the typical time lag between infection an death. 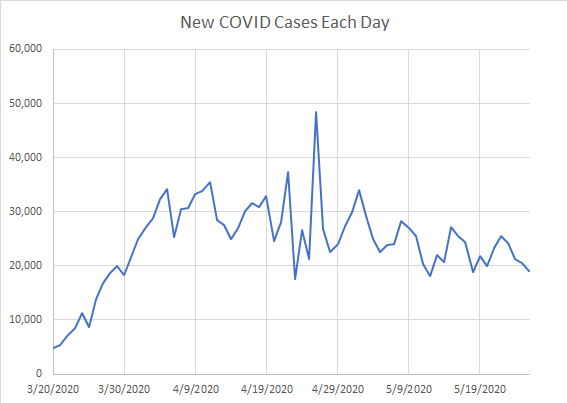 What sense can we make of the fact that the death rate seems to be plummeting while the number of cases is not? I think in terms of evolution, so that's the explanation I would suggest. All viruses evolve toward more contagion and less lethality. (Natural selection rewards a parasite for spreading to more hosts. Killing the host is a dead end for the parasite.) So I think COVID has been evolving to reach more people, but not to kill them. That is my hope, and I think it is supported by the data. Flu and other respiratory infections tend to die way back during the summer months. This is well known, though there is no agreed scientific explanation. It is reasonable to expect that COVID is fading away with the warm weather.