By Greg Palast and Thom Hartmann 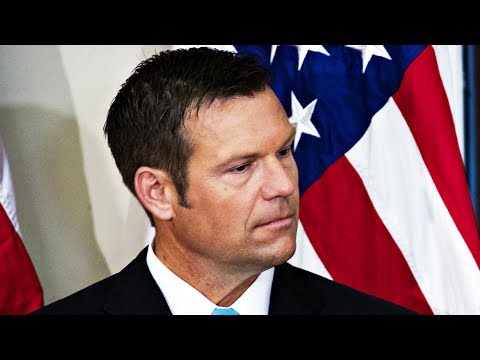 The wire transfers of $250,000 and $100,000 that Steve Bannon and Brian Kolfage were indicted for would have to be approved by the We Build the Wall foundation's general counsel Kris Kobach. The payments were in direct violation of the foundation's by-laws. Furthermore, Kobach used the non-profit's donor list to raise money for his Senate run, normally a felony crime.

I worked with the Justice Department on racketeering cases. You don't bust the capo (Bannon) unless you also bust the consigliere (Kobach). Both Bannon's indictment and Kobach's non-indictment would have to been personally approved by Attorney General, Bill Barr. (It's worth noting that Kobach pulled in up to $400,000 in legal fees from the We Build the Wall scam while running for Senate.)

My fear is that this is a Roger Stone special. Bannon, with Randy Credico, was the main witness against Stone in the federal trial. The Trump campaign needs to reactivate their top tricksters, Stone and Kobach. And Bannon needs muzzling after the Stone trial and for saying that Ivanka is dumber than a board of lumber.

Fun Fact: When I was investigating Kobach for Rolling Stone, Kobach called me (yes, a shock) and proudly told me that he was the one who told Trump he could make Mexico pay for the wall.

In this episode of the Thom Hartmann Program, we discuss Bannon's indictment and Kobach's intriguing non-indictment.

Thom Hartmann: Welcome back. On the line with us is our buddy Greg Palast, who's had such an extraordinary and storied career. Investigative journalist for the BBC, The Guardian, Rolling Stone. He's got a new book out, How Trump Stole 2020: The Hunt for America's Vanishing Voters. Plus his film, The Best Democracy Money Can Buy" Greg, welcome back to the show. I noticed when Steve Bannon got busted that Kris Kobach's name was floating around the outsides of this unsavory thing and immediately I thought Greg Palast" Tell us, what the hell's going on here?

Greg Palast: The interesting thing is what's not going on here, which is why wasn't Kris Kobach busted? We Build the Wall is basically a crime wave parading as a not-for-profit foundation. Kobach is General Counsel. Bannon and Brian Kolfage, the guys who founded it with Kobach said they wouldn't take a penny and yet they issued a check for $250,000 to Bannon with no explanation. $100,000 to Kolfage, which was in fact identified as wages. They're not supposed to take the money. That can't happen unless the General Counsel says, yeah, cut those checks. I know, I've got a foundation, Thom, and my general counsel, if I sent them a bill said, listen, just wire me a quarter million bucks" and give my friend a hundred grand while you're at it" He'd have the FBI on the line in a minute. And just so you know, actually, I did that. We did bust someone who tried to take a couple extra bucks from our foundation. We went to the FBI, and they're in prison. Hello, Mr. Kobach. Want me to send you a file in a cake? Why weren't you indicted?

Hartmann: So Kobach was the lawyer for We Build the Wall, this scam organization, this group that was put on to specifically rip off the most racist of the Trump supporters. Those who were the most afraid of brown people coming into the United States" there's a certain amount of schadenfreude here, correct?

Palast: I know. This is like schadenfreude with whipped cream, to see Bannon go down and all these racists get ripped off. But on the other hand, there's also the issue of the law and I want to know what's going on here. Because not only did Kris Kobach close his eyes to the checks going out" And remember, I was an investigator with the Justice Department. You don't bust the capos, then leave the consigliere to run free. That's what Kobach is, he's the consigliere to this crime, a racketeering enterprise. It's a classic racketeering enterprise, you know, you just scam the rubes. In addition though, now this is interesting" Kobach used the list from We Build the Wall to fundraise for his senate campaign. The last time I looked that's a felony go to jail crime" In other words, they're taking the money, but he has something that's more valuable to him, and that's using lists. Though he did crank the organization. I know how many people realize, he got something like up to $400,000 in the past year for legal fees while he's running for the U S Senate"

Hartmann: Greg, you told me about this years ago, that Kobach had been running this scam for years and years, where he would go to states and he would say, I'm going to help you challenge democratic voter fraud or something. They would give him hundreds of thousands of dollars. He would pretend to process data or something and sometimes they got left holding the bag. Sometimes they would pass some meaningless law" Kobach has been a grifter pretending to be a lawyer for a long time has he not?

Palast: Yes. He basically virtually bankrupted the town of Farmers Branch, Texas, which had to be bailed out by money indirectly from the Koch brothers. What I'm very concerned with is that, you know, you can't get a political indictment like this without the approval of the Attorney General, Mr. Barr. So he decided Bannon had to go but not Kobach? Now remember, what I'm very concerned with is that Bannon was the key witness with Randy Credico against Roger Stone. So I'm very afraid of the machinations of Roger Stone behind this, getting even with the guy who almost jailed him. And, of course, Bannon has a bad odor with the Mercer family. He attacked Ivanka, said she's dumber than a piece of lumber. So they had to get rid of Bannon. They didn't want him around for the campaign, but they need Kobach, so they made a very interesting decision. You're going to take down Bannon, but you're going to leave his co-conspirator out. He wasn't even mentioned in the indictment" You have to understand, with the Justice Department, that's impossible. So the fix is in, in some way" So look, we're all applauding that Bannon got pounced on on this one, but I'm very concerned about what they have in mind for Kobach and for Roger Stone in terms of mischief for this election.

Greg Palast's investigative reports appear in Rolling Stone, the Guardian and on BBC Television. His latest film, The Best Democracy Money Can Buy, on how Donald Trump stole the 2016 election, is available on Amazon. Palast is Patron of the Trinity (more...)
Related Topic(s): Fundraising; Justice Denied; Justice Department; Kris Kobach; Money, Add Tags
Add to My Group(s)
Go To Commenting
The views expressed herein are the sole responsibility of the author and do not necessarily reflect those of this website or its editors.