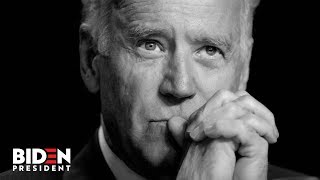 The man quickly identified himself as a vice chair of the Democratic National Committee. He didn't need to tell me that he was hopping mad.

Ken Martin was angry that my colleagues and I were handing out a flier providing some inconvenient facts about Joe Biden to delegates and activists as they entered the New Hampshire Democratic Party convention on Saturday. The headline, next to Biden's picture, quoted a statement he made last year: "I don't think 500 billionaires are the reason why we're in trouble."

While not flattering to the current frontrunner for the Democratic presidential nomination, the carefully documented RootsAction flier offered information that news coverage has rarely mentioned and that party activists, as well as voters overall, should know.

But Martin had a very different perspective. He heatedly told me that distributing such a flier was divisive and would harm the cause of defeating Donald Trump.

I tried to assure Martin that I'm as eager to defeat Trump as anyone. At the same time, we need primaries for good reasons, including fact-based scrutiny of candidates' records before they're nominated. However, I found it difficult to get words in edgewise, as Martin continued to denounce the leafleting.

A few hours later, Martin addressed thousands from the convention podium and in more restrained tones focused on blaming non-responsive voters for the failures of Democratic candidates to inspire them. "In 2016 we had 10 percent of Democrats who voted for Donald Trump," he said. "We had 53 percent of white women who voted for Donald Trump. We had a tripling of the third-party vote throughout our country. And probably most discouraging to me: as consistent Democratic base voters, people who always show up in elections, many of them didn't show up to vote at all."

A logical question would be: Why did many of them not show up to vote at all? But Martin wasn't going there. Instead, he went on: "You see, Democrats, we've got great candidates on full display today and I can guarantee you one of them is going to be the next president of the United States. But we have to come together, we have to come together. Let's not confuse unanimity with unity, we're Democrats, we don't agree on everything. But I will tell you, if we're not unified we will not win this election. We have to come out and support whoever the Democratic candidate is."

Martin is in major positions of power within the Democratic Party, not only at the DNC but also as chair of the party in Minnesota (the Democratic-Farmer-Labor Party) and as president of the Association of State Democratic Committees. For the bulk of the party leadership, in sync with front-runner Biden, self-critical assessments are essentially off-limits. The boilerplate calls for "unity" serve to distract from tough-minded examination of the reasons for widespread distrust and low vote rates.

Refusals to examine the patterns of the past render many party leaders unable to recognize or acknowledge what a disaster a Biden campaign against Trump would so likely be. It's of little use to plead for a strong turnout from "Democratic base voters" after nominating a weak and uninspiring candidate.

"A core challenge for the Democratic Party will be to raise the voter participation rate while drawing presently apathetic and uninvolved non-voters and occasional voters into the process largely younger people and African Americans," the report, "Autopsy: The Democratic Party in Crisis," said two years ago. The report (which I co-authored as part of a task force) pointed out that "a party doesn't grow by simply tallying up members and scolding them into showing up."

The specter of Joe Biden as the party's nominee runs directly counter to what the Autopsy called for: "To flourish, the Democratic Party needs an emphatic mission and a clear moral message that excites and provides a purpose that is distinct from the otherwise cynical spectacle of politics. Inspiring programs for truly universal health care, racial justice, free public college tuition, economic security, new infrastructure, green jobs, and tackling the climate crisis can do this. This is about more than just increasing voter turnout. It is about energizing as well as expanding the base of the party."

As presidential candidates crisscross the country, only two are showing how to energize activism on a large scale while inspiring voters. That was apparent again inside the arena in New Hampshire, where Bernie Sanders (who I continue to actively support) and Elizabeth Warren delivered high-voltage progressive speeches that left others in the dust.

Biden's mediocre speech at the New Hampshire convention on September 7 is already an historic record of a dismal candidate for president whose nomination promises to be a disaster. To pretend otherwise is hardly a service to the crucial task of defeating Donald Trump.

Related Topic(s): Chairman-dnc; Disaster; Joe Biden; Nomination; President, Add Tags
Add to My Group(s)
Go To Commenting
The views expressed herein are the sole responsibility of the author and do not necessarily reflect those of this website or its editors.