Michael Collins: The Money Party Why We Get Such Lousy Leaders and How to Get Rid of Them 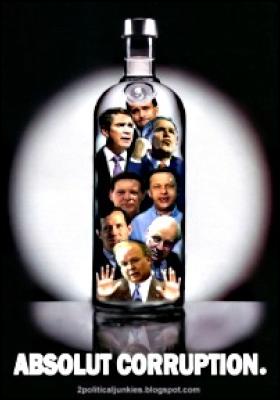 (Image by Unknown Owner)   Details   DMCA
By Michael Collins
Scoop Independent News
Washington, D.C.
Hey, hold on there! Who says we have lousy leaders? Just about everybody. Between 40% and 60% of voting age citizens stay away form the polls in just about every election. In 2004, there were 221 million voting age citizens and 44 % of them, 98 million people, chose not to vote. Of the 226 million potential voters in 2006, a whopping 62%, 141 million people, stayed home.
When you ask why they chose not to vote, the common answer is “it makes no difference, they’re all a bunch of crooks.” If “no difference” were a candidate, he or she would win every election.
Why don’t we hear more about this huge voting block, “no difference?” Because an open discussion of the year in and year out refusal of half of those 18 and older to participate throws cold water on the legitimacy of every president and elected representative that we have.
No matter who they are, the elected consistently lack the endorsement of around half the population that stayed home plus somewhat less than half of those who voted since those voters chose another candidate. The right to govern is consistently granted by around 25% of the voting age citizens in presidential elections and 20% or less in off year elections.
It’s obvious. The Money Party doesn’t want us to vote. Its members, those few individuals and corporations who control most of the wealth, fund, elect, and control candidates who act in ways that cause people to say: “Forget about it. There’s no difference between any of them, they’re all a bunch of crooks.”
Let’s take a look at what happened after the 2006 elections.
We have a president and a co-president who are on record as saying that they don’t care what we think and a Congress that gave these politically deaf, dangerous men the same authority to attack Iran that was given to attack Iraq. Come on down Bush-Cheney, here’s your blank check for a brand new war!
What a strange elixir power is, a drug that apparently intoxicates and transforms those elected as they’re sworn into federal office. We, “the little people,” matter not to the few who cruise the corridors of power.
Leaders who fail to respond to the obvious sentiment of the public are lousy leaders, plain and simple. Their inadequacy is even more obvious when they fail to do much of anything that benefits the general public, all the while adding to the incomes of the corporations and individual donors who placed them in power. Even as the corporate media continue to prop up the government by down playing the real news, the general public knows that they have a tyrant at the top and enablers in supporting roles.
Citizens made to feel helpless are the essential ingredient needed to maintain the sham governments we get, the lousy leaders who shamelessly ignore the general welfare while diligently filling the public trough for their patrons in The Money Party.
Citizens who become outraged when lied to are the essential ingredient needed to retire the money party and take control of their own destinies.
What can we do about this?
How about this? Make them all sign an employment contract. We’ve forgotten that they’re our “public servants.” Let’s get everybody voting, including the powerful “no difference” block.

This is just common sense. Elected office is a critically important trust. Those who serve have a major impact on all citizens. We all have to sign some sort of employment contract or work under rules that are, in essence, a contract. Why not the same deal for those who seek the honor of serving in elected office? Why not put them to the test when they say “we vote our conscience and not the interests of our contributors”? Why not make them truly accountable to us? How many insincere politicians would sign up for this type of scrutiny? How many would survive it?
Put the people back in charge through real accountability on the part of elected officials and provide clear consequences for undue influence that betrays the public trust.
Image Credit: 2politicaljunkiies.blogspot.com
Previously: The Money Party (1). The Essence of our Political Troubles
Note: The Republic of Venice had a similar contract (promissione) for their leaders. It was a very serious pledge since a violation meant the leader would be banished from Venice, by far the wealthiest, most advanced, and tolerant nation-state for several hundred years. It worked and most everybody did very well most of the time which is why Venice was called The Most Serene Republic.

(Image by Unknown Owner)   Details   DMCA
Permission to reprint this article in whole or part with a link to the original article in Scoop Independent News and attribution of authorship to Michael Collins.

Whether you call it the world financial structure, the U.S. culture of waste, or the ability of the common man to make a decent living, the system is broken. It's time for the common man to go on strike. Join or support the March on Washingon (more...)
Related Topic(s): Betrayal; Citizens; Elections; Independent Voters; Leader; Leadership- Leaders; Money; Money; People; People; (more...) Power; Voting, Add Tags  (less...)
Add to My Group(s)
Go To Commenting
The views expressed herein are the sole responsibility of the author and do not necessarily reflect those of this website or its editors.

The Great Depression of 2009