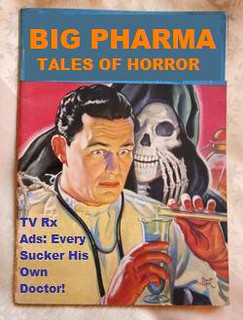 According to a new federal database put online last week, pharmaceutical companies and device makers paid doctors some $380 million in speaking and consulting fees over a five-month period in 2013.

Some doctors received over half a million dollars each, and others got millions of dollars in royalties from products they helped develop.

Doctors claim these payments have no effect on what they prescribe. But why would drug companies shell out all this money if it didn't provide them a healthy return on their investment?

America spends a fortune on drugs, more per person than any other nation on earth, even though Americans are no healthier than the citizens of other advanced nations.

Of the estimated $2.7 trillion America spends annually on health care, drugs account for 10 percent of the total.

Government pays some of this tab through Medicare, Medicaid, and subsidies under the Affordable Care Act. But we pick up the tab indirectly through our taxes.

We pay the rest of it directly, through higher co-payments, deductibles, and premiums.

Drug company payments to doctors are a small part of a much larger strategy by Big Pharma to clean our pockets.

Another technique is called "product hopping" -- making small and insignificant changes in a drug whose patent is about to expire, so it's technically new.

The capsules were just a reformulated version of the tablet. But even the minor change prevented pharmacists from substituting generic versions of the tablet.

Result: Higher profits for Forest Labs and higher costs for you and me.

Another technique is for drug companies to continue to aggressively advertise prescription brands long after their 20-year patents have expired, so patients ask their doctors for them. Many doctors will comply.

America is one of few advanced nations that allow direct advertising of prescription drugs.

A fourth tactic is for drug companies to pay the makers of generic drugs to delay their cheaper versions. These so-called "pay-for-delay" agreements generate big profits for both the proprietary manufacturers and the generics. But here again, you and I pay. The tactic costs us an estimated $3.5 billion a year.

Related Topic(s): Doctors; Drugs; Health; Pharmaceutical Industry, Add Tags
Add to My Group(s)
Go To Commenting
The views expressed herein are the sole responsibility of the author and do not necessarily reflect those of this website or its editors.