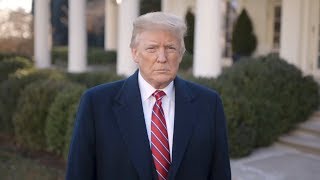 President Trump: .It's Time For Our Troops To Come Back Home.
(Image by YouTube, Channel: The White House)   Details   DMCA

Trump's abrupt call for US troops to leave Syria is being lambasted by his domestic critics as "a gift to Russia." The paradox is that peace signals on Syria could bode sharper conflict with Russia in Ukraine. Hardly a gift.

President Trump's announcement via Twitter of a military pullout from Syria is best understood as a superficial political move.

The subsequent prompt resignation by his Defense Secretary James Mattis -- within hours of Trump's declared withdrawal -- shows the president is deeply at odds with the Pentagon. Military officials say they were blindsided by Trump. Mattis' resignation, therefore, came as a rebuke.

Trump's feel-good rhetoric in announcing the Syria move betrays his egotistical craving to be seen as bestowing a Christmas goodie to his voter base.

"We have won against ISIS. Our boys, our young women, our men -- they're all coming back and they're coming back now," said Trump in self-congratulatory tone.

Given the embarrassing funding setback this week to his much-ballyhooed plans for the border wall with Mexico, Trump badly needed to throw his voter base a bone. Bringing "our boys" back from Syria is the president's consolation gift in the season of goodwill.

The stunned reaction from Democrat and Republican lawmakers, as well as NATO allies, who all deprecated the troop withdrawal plan, shows that Trump is acting impetuously, looking for a political bounce among his supporters, especially after his signature Mexican wall project hitting a funding dead-end in Congress.

Russia has welcomed Trump's pullout decision for Syria, saying that it potentially could help consolidate a political settlement in the Arab country wracked by nearly eight years of war.

Nevertheless, President Vladimir Putin noted in his annual press conference this week that it remains to be seen if the planned US withdrawal actually materializes. Only a couple of months ago, national security adviser John Bolton declared US forces would be in Syria for as long as Iranian forces were present.

A phalanx of critics lined up to excoriate Trump over this "victory" announcement. Republican senators, including loyalists like Lindsey Graham, joined with Democrats to slam the move as a concession to "our enemies" -- Russia and Iran. Media pundits and so-called liberal Hollywood celebrities also piled in with similar accusations that Trump was pandering to Russia. Of course, that view fits in with the fantasy of Trump being a stooge for Putin.

What seems to escape the assorted "stay in Syria brigade" is that US troops are illegally present in the country. American forces -- about 2,000 on the ground as well as warplanes -- are in violation of international law since they do not have a UN Security Council mandate, nor authorization from Syria's government.

In any case, the notion that Trump's military withdrawal, or "retreat" as some critics put it, is a signal for peace or "gift" to Russia is woefully misplaced.

Earlier this week, Kurt Volker, the Trump administration's envoy to Ukraine, told a forum in Brussels that $250 million worth of military equipment was on its way to the US-backed regime in Kiev.

That latest installment is in addition to the $1 billion of military assistance Washington has provided the Kiev regime since it seized power in February 2014 with the US-backed coup. It was the Trump administration that broke new ground from former president Obama when it signed off on $47 million in "lethal military supply" to the Kiev regime this year in the form of anti-tank javelin missiles.

Related Topic(s): Russia - Syria Treaty; Syrian Situation; Trump And Putin; Ukraine; Withdrawal, Add Tags
Add to My Group(s)
Go To Commenting
The views expressed herein are the sole responsibility of the author and do not necessarily reflect those of this website or its editors.