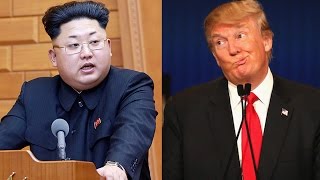 The Trump administration's leaks of plans for a "bloody nose" strike on North Korean nuclear and/or missile sites is only the most recent evidence of its effort to sell the idea that the United States is prepared for a first strike against the Democratic People's Republic of Korea (DPRK). But the "bloody nose" leak -- and the larger campaign to float the idea of a first strike against North Korea -- isn't going to convince Kim Jong Un or anyone else who has paid close attention to the administration's propaganda output.

That's because national security adviser H.R. McMaster and other senior advisers know the Trump administration has no real first-strike option that is not disastrous. A review of the entire campaign to suggest otherwise reveals the leak has been spun in the hope of creating pressure on Pyongyang.

A Telegraph story said the administration was "drawing up plans for a 'bloody nose' military attack on North Korea to stop its nuclear weapons program," but "one option" is destruction of a missile launch site before a missile test.

A Wall Street Journal article on Jan. 9 reported that administration officials were still "debating whether it's possible to mount a limited military strike against North Korea on sites without provoking an 'all-out' war on the Korean peninsula."

The Trump administration began its first-strike campaign with the leak of a much more aggressive story last April. Three NBC News reporters published a story that "multiple intelligence officials" had told them the U.S. was "prepared to launch" such a strike against nuclear or missile targets, or even against cyber and special operations targets, if U.S. intelligence had indications of an impending nuclear test.

That threat turned out to be without substance. On July 3 and again on July 28, the DPRK carried out tests of its Hwasong-14 ICBM, and on Sept. 3, it carried out its sixth nuclear test -- all without any retaliatory response from the Trump administration.

After the two ICBM tests, McMaster was asked in an Aug. 5 interview with MSNBC's Hugh Hewitt whether the administration was preparing the public for a first strike against North Korea. McMaster's response did not present a case for such a strike but attributed it to Trump's insistence. If the DPRK has "nuclear weapons that can threaten the United States," he said, "it's intolerable from the president's perspective ... so, of course, we have to provide all options to do that ... and that includes a military option."

McMaster's failure to make a clear policy argument for the first-strike option -- based on the idea that Kim Jong Un is unstable or irrational and not subject to the logic of deterrence -- showed that the U.S. intelligence community has adopted an assessment that the North Korean leader is a careful, calculating decision-maker with no interest in attacking the United States with nuclear weapons. The deputy chief of the CIA's Korea Mission Center, Yong Suk Lee, even went to the unusual lengths to make the center's assessment public at a conference in Washington last October. In his presentation, Lee referred to Kim Jong Un as a "very rational actor," adding that "bluster and rhetoric aside," he has "no interest" in going to war against the United States. Lee even described Kim's "long-term goal" as being to "come to some kind of power agreement with the United States and remove U.S. forces from the peninsula."

A few days after the MSNBC interview, U.S News reported that people familiar with McMaster's thinking about North Korea had confirmed he agreed with the consensus within the intelligence community and the military that Kim is a "rational actor who is seeking nuclear weapons to deter an attack on North Korea, not to attack the United States or its allies."

Nevertheless, McMaster refused to give up that theme, even if it was not based on rational argument. In an interview with ABC on Aug. 13, McMaster asked how "classical deterrence theory" could "apply to a regime like the regime in North Korea? A regime that engages in unspeakable brutality against its own people? A regime that poses a continuous threat to its neighbors in the region and now may pose a threat, direct threat, to the United States with weapons of mass destruction?" And in a Dec. 3 interview with Chris Wallace of Fox News, McMaster said, "I don't think you or anybody else is willing to bet the farm -- or a U.S. city -- on the decision-making, rational decision-making of Kim Jong Un."

In the same Fox News interview, McMaster asserted that the DPRK would "use that weapon for nuclear blackmail and then to quote, you know, unify the peninsula under the red banner." Two weeks later in an interview with the "PBS NewsHour," McMaster referred again to the idea that Kim's "intentions likely involve nuclear blackmail." But he cited nothing to indicate that such North Korean "nuclear blackmail" could work, suggesting again that it is an argument of political convenience rather than of conviction for McMaster.

In an interview with Evan Osnos of The New Yorker in September, McMaster began to gravitate toward a different argument: that the North Koreans had "proliferated just about every capability they've ever produced, including chemical weapons and a nuclear reactor." And he argued that others in the region would want their own nuclear weapons if "a rogue regime developed nukes and got away with it."

But the full story reveals the U.N. report in question said nothing indicating the North Korean goods intercepted were related to chemical weapons. It said an unidentified state believed two shipments from North Korea bound for Syria that had been intercepted were part of a contract between North Korea and KOMID, the Korea Mining and Development Trading Corporation, which has acted as a Syrian contractor for the Scientific Studies and Research Center (SSRC). In the past, SSRC has been responsible for both ballistic missiles and chemical weapons, as the story noted, but KOMID has been blacklisted in the past for its role in importing parts for ballistic missiles, not for chemical weapons. The story implied that the goods interdicted had to do with Syrian Scud missiles and repair of surface-to-air missiles and other air defense systems.

Related Topic(s): Bluffing; China; Increasing The Risk Of Nuclear War; North Korea, Add Tags
Add to My Group(s)
Go To Commenting
The views expressed herein are the sole responsibility of the author and do not necessarily reflect those of this website or its editors.