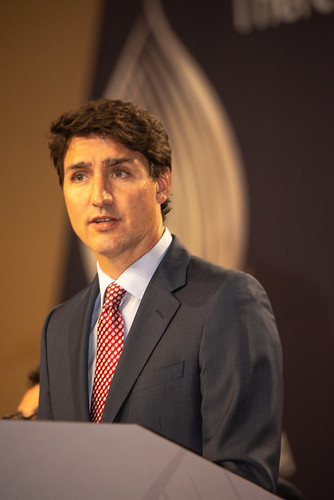 Justin Trudeau is campaigning aggressively for a seat on the UN Security Council. Over the past month he has called about two dozen world leaders and recently organized calls with groupings of UN ambassadors from the Americas, Africa, Arab states and Asia. Just prior to the pandemic the PM attended the African Union Summit in Ethiopia and met with all African ambassadors in Ottawa to make his pitch for Canada's Security Council bid.

Why devote so much energy to winning the seat? Some have labeled it a "vanity project", which is not far off the mark. A more apt description of the objective, however, is that a Security Council seat serves the government's branding. It would help the Liberals distinguish themselves from the Conservatives who lost their bid for the Security Council in 2010. Soon after winning the 2015 election Trudeau announced Canada's candidacy for the UN's most powerful decision-making body and declared "many of you have worried that Canada has lost its compassionate and constructive voice in the world over the past 10 years. Well, I have a simple message for you: on behalf of 35 million Canadians, we're back."

Part of Trudeau's appeal is that he is liked internationally. With many Canadians considering it important that people elsewhere like their country, Trudeau has sought to capitalize on that healthy, if somewhat amorphous and easily manipulated, desire.

The second major dynamic driving the bid is Global Affairs' and the Canadian state more generally interest in more power. Institutions tend to seek power for the sake of it. For individuals within the bureaucracy say an ambassador or the head of a country desk at Global Affairs the greater the clout of the government they represent the more respect officials elsewhere tend to show them. Most diplomats appreciate that. And with the two main forces shaping Canadian foreign policy the US Empire and Canadian corporate interests happy to have Canada garner more clout through the Security Council, why not.

Expanding Canadian power is widely backed in the political culture as well. All the main political parties appear to support the Security Council campaign. People who want Canada to be a force for good in the world should consider this an affront. Canada's competitors, Ireland and Norway, have far less damaging foreign policies, as highlighted in this story on "10 reasons Canada doesn't deserve a seat". Ireland and Norway have half Canada's per capita greenhouse gas emissions; They have consistently voted for Palestinian rights at the UN; They are derelict on fewer international conventions; They aren't part of the imperialist, Venezuela-focused Lima Group or Haiti-focused Core Group. Basically, if you oppose rich nations dumping their trash in poor countries, support nuclear disarmament and reducing greenhouse gas emissions you should prefer Ireland and Norway win the two Western Europe and Others seats.

Not only are Ireland and Norway better candidates for the two positions than Canada but losing the seat would deliver a blow to Trudeau that could benefit the NDP and Greens. A loss would be harder on Trudeau than Harper since the Liberals base supports the UN and the international body is closely linked to how they market their foreign policy.

If Canada loses the seat it will be interesting to see if the NDP and Greens continue their 'Team Canada' approach to the Security Council bid or if they take the opportunity to criticize Trudeau's anti-Palestinian voting record, failure to sign international conventions, indifference to nuclear disarmament, etc. If they pass up the opportunity to embarrass Trudeau on the issues it would be a devastating comment on the power of 'Team Canada' foreign policy ideology.

Canada will never become a force for good in the world until its citizens stop blindly cheering for 'their side' and actually pay attention to what governments are doing in their name.