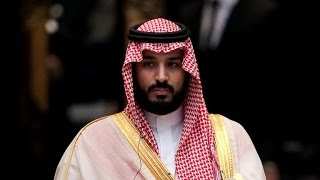 Mass arrests of senior royals, amid fear of assassinations, indicate that what is going on in Saudi Arabia is a far-reaching purge. The facade of a "corruption probe" -- promoted in part by Western news media and US President Donald Trump -- is a barely credible cover.

The cover is not just for a ruthless power grab within the desert kingdom by Saudi rulers, but a realignment that also puts the entire Middle East region on notice for more conflict and possibly even an all-out war with Iran. A war that the Israeli state and the Trump administration are enthusiastically egging on.

This move towards war with Iran could explain why the Saudi royals made a landmark trip to Moscow last month. Was it an attempt to buy off Russia with oil and weapons deals in order to free the Saudi hand with regard to Iran?

In typical fragmented fashion, Western media have tended to report the mass arrest last weekend of royal princes, ministers and business leaders, carried out under the orders of King Salman and his heir Crown Prince Mohammed bin Salman, as a crackdown on corruption and business sleaze.

Omitted in media coverage is the significant wider context of the Saudi rulers moving at the same time to exert political control over regional politicians, as well as making sensational claims that Iran and Lebanon have "declared war" on Saudi Arabia by allegedly supporting a missile strike from Yemen.

The apparent forced resignation of Lebanese premier Saad Hariri last weekend after having been summoned to Saudi capital Riyadh provided convenient substance to Saudi claims that Iran and its Lebanese ally Hezbollah were destabilizing Lebanon and indeed plotting to assassinate Hariri.

However, Hariri was just one of several regional political figures whom the Saudis were reportedly putting pressure on. Reports emerged that the ex-Yemeni president Mansour Hadi has been held under house arrest in his exile home in Riyadh. There were reports too of Syrian opposition figures being detained in Riyadh. And the Palestinian leader Mahmoud Abbas was ordered to the Saudi capital. This suggests the Saudis are orchestrating a regional chorus line.

Furthermore, there were credible Israeli media reports that the government of Benjamin Netanyahu in Tel Aviv is coordinating with Saudi Arabia to support the latter's accusations against Iran and Hezbollah of committing acts of war from Yemen by supplying missiles to the Houthi rebels.

Washington has also weighed in to support the Saudi claims that Iran is arming the Houthis in violation of a UN Security Council resolution. Referring to the missile strike on Riyadh international airport last Sunday President Trump said that "Iran took a shot at Saudi Arabia." Then the US ambassador to the UN Nikki Haley later in the week called for sanctions against Tehran, citing Saudi "evidence." Iran has dismissed the claims as baseless, pointing to the Saudi air, sea and land blockade on Yemen as preventing any such weapons supply.

The power behind the Saudi throne, Mohammed bin Salman (MbS), the 32-year-old son of aging King Salman (82), has emerged as an ambitious autocrat who also harbors an intense hostility towards Iran. In several media interviews, the Crown Prince has disclosed an obsession with crushing Iran. This goes way beyond the usual sectarian Wahhabi antipathy of Saudi leaders towards Shia Iran.

Crown Prince MbS is playing a smart game to a degree. He has made a big media play on "reforming" Saudi Arabia from its fundamentalist social conservatism to become a seemingly more cosmopolitan society. The Crown Prince has pushed reforms giving Saudi women the right to drive cars, travel without male guardians, and enter sports stadiums. Hardly radical advances in gender equality. Nevertheless, MbS has ably projected himself with Western media assistance as something of a progressive reformer.

Those changes are but the veneer for ruthless ambitions and a hyper power-grab within the despotic House of Saud. The supposed "corruption probe" is another layer of varnish to conceal much more sinister developments.

Britain's Guardian newspaper this week waxed lyrical over the mass round-up of senior Saudi royals and ministers describing it as a "revolution" carried out by the would-be reformer Crown Prince, placing the development in the context of minor liberalization of women's rights.

Meanwhile, the New York Times offered an apologia for the "Saudi Corruption Crackdown" by saying: "Graft is so pervasive that any measures short of revolutionary change may appear to be selective prosecution."

Related Topic(s): Arming Saudi Arabia; Coup; Crown Prince Mohammed Bin Salman; Iran; Israel, Add Tags
Add to My Group(s)
Go To Commenting
The views expressed herein are the sole responsibility of the author and do not necessarily reflect those of this website or its editors.