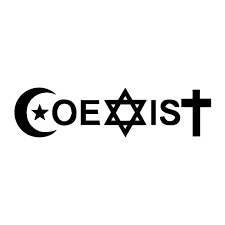 We often hear about the importance of religious coexistence. Many of us see "coexist" bumper stickers (as pictured above) on a daily basis. It's usually directed at people who believe in the man-made Abrahamic "revealed" religions of Judaism, Christianity or Islam.

Looking at Judaism, we see the Hebrew Bible is overflowing with commands, allegedly from God, to Jews. These commands cover virtually all aspects of life, from what to wear, what to eat, how to pray and many other mundane topics.

When it comes to how Jews should interact with non-Jews/gentiles, we see how coexistence takes unrecoverable hits. There are many examples of this, but I will mention only two.

The anti-gentile teachings in the Hebrew Bible extend all the way to actual slavery. The 25th chapter of Leviticus is about the Jubilee. It is a popular misconception that the freedom of slaves this chapter claims God commanded, was for all slaves. In an irrevocable blow against coexistence, an objective and honest reading of this Hebrew Bible chapter makes it very clear that freeing of slaves was only for Jewish slaves. Gentile people who were slaves with Jewish masters/owners were not to be freed. Leviticus 25:44-46 falsely claims that God commanded: "Both thy bondmen, and thy bondmaids, which thou shalt have, shall be of the heathen that are round about you; of them shall ye buy bondmen and bondmaids. Moreover of the children of the strangers that do sojourn among you, of them shall ye buy, and of their families that are with you, which they begat in your land: and they shall be your possession. And ye shall take them as an inheritance for your children after you, to inherit them for a possession; they shall be your bondmen for ever: but over your brethren the children of Israel, ye shall not rule one over another with rigour." This Hebrew Bible command clearly outlaws Jews owning their fellow Jews as slaves, but allows Jews to own Gentile people and their children as slaves forever. The gentile men, women and children who the Jews own as slaves are to be passed as an inheritance from one generation to the next generation of Jews, as the property of the Jewish slave owners and their children. The duration of this command is "for ever." How can any gentile person want to coexist with something as ungodly and disgusting as this? Something that will eternally keep them and their children and all of their decendants literally as slaves, as mere property to be bought and sold by Jews?

When we look at Christianity, we see it looks upon the Hebrew Bible as being part of the word of God. It then tacks on the New Testament, and refers to the ungodly combination of the two as the Christian Bible and the Christian word of God.

The Christian word of God teaches that Jesus was part Jew and part God, and that Jesus believed the Hebrew Bible was the word of God.

Jesus' deep belief that the Hebrew Bible is the word of God, is seen at Mark 7:1-13, which tells the story of Jesus getting angry with the Pharisees, because the Pharisees did not follow the teaching and command in the Hebrew Bible at Exodus 21:17, which claims God commanded, "And he that curseth his father, or his mother, shall surely be put to death." Verses 12 and 13 of this chapter of Mark states that Jesus said to the Pharisees who did not follow the ungodly command in the Hebrew Bible to kill their children, "And ye suffer him no more to do ought for his father or his mother; Making the word of God of none effect through your tradition, which ye have delivered: and many such like things do ye."

Regarding slavery itself, the Christian New Testament at Ephesians 6:5 has this teaching for people who are slaves: "Servants, be obedient to them that are your masters according to the flesh, with fear and trembling, in singleness of your heart, as unto Christ."

The tie between Christianity and Judaism is central to the Christian Reconstructionism movement, which recognizes how Jesus, according to the anonymous authors of the Gospels, embraced and promoted the fear-based and merciless commands and laws of the Hebrew Bible. The goal of Christian Reconstructionism is to make the nonsensical and horrific laws in the Hebrew Bible/Old Testament, the law of the land in the United States, and eventually in countries around the world. They share this goal with both Christian Dominionism and with the neoconservative movement.

One of the founders of Christian Reconstructionism, R. J. Rushdoony, wrote often about the importance of what he mistakenly believed was God's law in the Hebrew Bible/Old Testament taking precedence over all man-made laws, such as the US Constitution and Bill of Rights. In his essay Introduction to the Law he wrote, "It is a modern heresy that holds that the law of God has no meaning nor any binding force for man today. It is an aspect of the influence of humanistic and evolutionary thought on the church, and it posits an evolving, developing god. This 'dispensational' god expressed himself in law in an earlier age, then later expressed himself by grace alone, and is now perhaps to express himself in still another way. But this is not the God of Scripture, whose grace and law remain the same in every age, because He, as the sovereign and absolute lord, changes not, nor does He need to change. The strength of man is the absoluteness of his God."

When we objectively look at the Quran, we see that basing society on the commands found in it, that are falsely claimed by Muslims to be from God, would make a miserable and very hellish world.

Bob Johnson is a paralegal and a freelance writer in Florida. He was raised Roman Catholic, but after reading Thomas Paine's The Age of Reason, he became a Deist. In 1993 he founded the World Union of Deists and in 1996 he launched the first web (more...)
Related Topic(s): Belief; Change; Christianity; Einstein; Jesus; People; Religion; Religious Hypocrisy; Religious Right; Slavery; (more...) Thinking; Violence; Women, Add Tags  (less...)
Add to My Group(s)
Go To Commenting
The views expressed herein are the sole responsibility of the author and do not necessarily reflect those of this website or its editors.