Cross-posted from The Guardian
Not only is he the world's best-known economist, Krugman has the intellect and integrity to resist Wall Street's calls for austerity 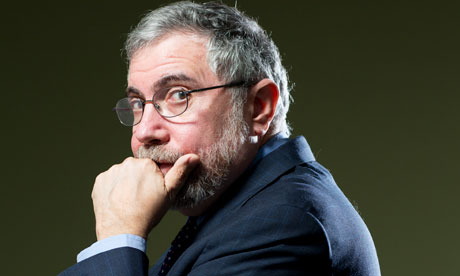 (Image by Unknown Owner)   Details   DMCA
Paul Krugman: "The rich are different from you and me: they have more influence." Photograph: David Levene for the Guardian

President Obama hasn't picked a treasury secretary yet for his second term, so he has a chance to do something different.

He could ignore what Wall Street and conservative media interests want and pick somebody who would represent what the electorate voted for. And not even just the people who voted for him: there are a lot of Republican voters out there who are also unemployed.

I know what you are thinking: this is impossible. There is too much money and power on the other side of this idea. Well, maybe.

But Obama has surprised us before. Last June, he picked Jim Kim to run the World Bank. This was unprecedented and an historic change; Kim is practically the only World Bank president in 60 years who was not previously a banker or a war criminal. On the contrary, Kim had spent most of his entire adult life trying to help poor people get healthcare.

Now, of course, the World Bank is not a cabinet appointment, but there is a lot of money that flows from that supposedly multi-lateral institution to the coffers of US corporations. You can bet that Jim Kim was not their top choice.

Obama is currently coming under heavy fire for his reported choice of former Senator Chuck Hagel to be defense secretary. Hagel wants to get out of Afghanistan soon, does not want a war with Iran, favors negotiations with Hamas, and supports cuts in military spending.

Not only the neo-conservatives, but some of the most powerful interests in the country, including the right wing of the pro-Israel lobby, have launched a smear campaign. But so far, Obama has not backed down. This could have something to do with the fact that he no longer has to run for re-election.

So, for the post of treasury secretary, to replace the outgoing Tim Geithner, Obama could afford to make another bold choice: Paul Krugman.

Krugman would be tough to oppose on any substantive grounds. He has a Nobel Prize in economics (also the John Bates Clark award for best economist under 40). The New York Times columnist is probably the best-known living economist in the United States, and perhaps the world.

Krugman has been right about the major problems facing our economy, where many other economists and much of the business press have been wrong. A few examples: he wrote about the housing bubble before it collapsed and caused the Great Recession; he has forecast and explained that large budget deficits and trillions of dollars of "quantitative easing" (money creation) would not cause inflation or long-term interest rates to rise; and that the "confidence fairies" would not reward governments that pursued austerity in the face of recession.

Most importantly, Krugman is on the side of the majority of Americans. He has written extensively in favor of policies that favor job creation, explained the folly of budget cutting in the face of a weak economy, and opposes cuts to Social Security and Medicare benefits.

After all, why should the secretary of the treasury have to prioritize the interests of Wall Street and the "criminal enterprise" of big finance, as Charles Ferguson, academy award-winning film-maker and political scientist, describes it.

The US treasury secretary also has an important influence on the rest of the world, as the most powerful force within the IMF, G20, and G7 groupings. Krugman has written extensively about the stupidity of the last few years of economic policy in Europe, which has been a major drag on the whole world economy. The treasury secretary would have only limited influence on Europe through the IMF, but in developing countries the US treasury department pretty much is the IMF.

Imagine a treasury secretary who favored employment, poverty reduction and development, rather than unnecessary austerity, in developing countries.

The whole debate over economic policy in this country is taking place as though it exists in a fictional, upside-down world. With the federal government paying less than 1% of GDP in net interest on the debt, the lowest in more than 60 years, the loudest voices -- backed by the biggest money -- are daily trying to convince people and policy-makers that deficit reduction is our most important priority. This, despite the fact that most of them know that this will slow the economy and make it more difficult for the 22 million people who need work to find it.

It would be great to have a treasury secretary who can cut through all that crap. And since most of Wall Street's money went to Republican nominee Mitt Romney in the run-up to the November election, Obama doesn't owe anything to the people who crashed our economy and are now fighting to make senior citizens, working and poor people reduce their living standards.

Related Topic(s): Obama Appointments; Paul Krugman; Secretary Of The Treasury, Add Tags
Add to My Group(s)
Go To Commenting
The views expressed herein are the sole responsibility of the author and do not necessarily reflect those of this website or its editors.