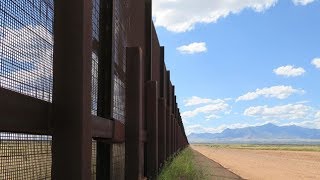 Correct me if I'm wrong but my recollection is that in his campaign for the presidency, President Trump said that he was going to make Mexico pay for his 1,900-mile wall along the U.S.-Mexico border. All I see today is Trump and his supporters getting angry over the fact that Congress is, so far, refusing to pay for Trump's Wall.

I don't get it. Forcing Mexico to pay for Trump's Wall is quite a bit different from forcing American taxpayers to pay for it. Why did Trump go from his initial position to his new position?

How much are we talking about here? Well, no one really knows exactly how much Trump's Wall is going to end up costing but we can safely assume, given the history of public-works projects, that it will be a big multiple of what it's estimated to cost initially. According to an article on Business Insider, an internal report in February 2017 said the wall would cost $21.6 billion. Trump is asking for $25 billion. That means that it will probably end up costing at least three times that amount, around $75 billion. In fact, the same article said that Democrats are saying it will cost $70 billion.

Now, go to US Debt Clock. It shows how much the federal government owes people. Right now, the federal debt totals more than $21 trillion. That's not chicken feed. In fact, the debt clock points out that the total debt per citizen is more than $217,000 and per family more $852,000.

Why is that important? Because the only way that the federal government can pay off its debt is by collecting the money first from the citizenry through taxation. So, assuming that the federal government will pay its debt, each U.S. citizen needs to factor in to his financial planning. The fact is that that $21 trillion will need to come out of the pockets of individual taxpaying citizens.

Moreover, the Trump administration is spending around $1 trillion per year more than what it's bringing in with taxes. That means that the total amount of federal debt will soon increase to $22 trillion.

Conservatives love to rail against excess federal spending and debt. In fact, one of their favorite proposals is a balanced-budget amendment in the Constitution.

Yet, here are Trump and his conservative supporters criticizing Congress for not adding another $25 billion (which will undoubtedly go up to at least $75 billion) to federal spending (and debt) for their enormous and enormously expensive huge public-works project.

Of course, a practical question arises: How could Trump do that, given that the Mexican government refuses to voluntarily fork over the money?

The answer is simple: a military invasion, just like the ones the U.S. has done to countries like Iraq, Afghanistan, Syria, Cuba, Grenada, Panama, and others. Trump could order the U.S. military to invade Mexico, proceed to Mexico City, and seize all the money in the Mexican treasury. If there isn't enough there, Trump's troops could seize Pemex, the government-owned oil company. If that still isn't sufficient, the military could seize, say, the entire northern half of the country, which is precisely what President Polk did in the Mexican War.

Recall that Polk provoked Mexico into attacking U.S. troops in Brownsville in order to have a pretext for going to war against Mexico and stealing the northern half of the country, the half that Mexico wasn't willing to sell to the United States. U.S. troops ended up in Mexico City, where they secured a surrender and a peace treaty, the Treaty of Guadalupe Hidalgo. In the treaty, Mexico agreed to cede almost the entire northern half of the country to the United States, and every Mexican citizen who was living in that part of Mexico was automatically converted into an American citizen, even though most of them could not speak English and were unaccustomed to U.S. laws, traditions, and culture.

In fact, Trump could actually go further than Polk did. He could seize all of the rest of Mexico -- that is, the part that Polk didn't take -- and incorporate it into the United States. That would mean no more illegal immigrants, at least from Mexico, because all Mexican citizens would suddenly be American citizens. Of course it would also mean no more need for a $75 billion Berlin Wall along the U.S.-Mexico border since it would now all be the United States.

Uh, oh. I'm only kidding, of course, but now I'm concerned that I might have given Trump and his band of merry big-spending militarist Trumpistas a very bad idea.

Related Topic(s): Mexico Wall; Money; Taxpayers; Trump Cruelty; Trump Untrustworthy, Add Tags
Add to My Group(s)
Go To Commenting
The views expressed herein are the sole responsibility of the author and do not necessarily reflect those of this website or its editors.