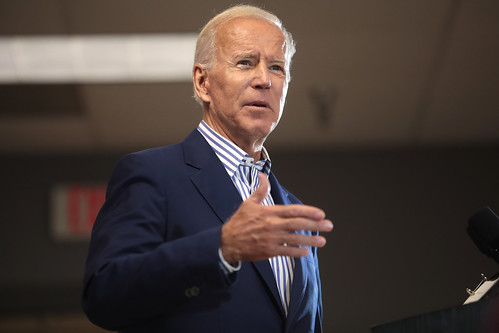 The ultimate political retread, a guy on his third run for the Democratic nomination after the first two failed decades ago, who would be considered a racist if the obvious were not banned from the discourse, is leading the race for the Democratic presidential nomination on the backs of African American voters, mostly in former slave-states 20 years into the twenty-first century. How can this be?

Fear the cable networks, for they enslave you. How did the Democrats get their good old boy, game manager Joe Biden back in the game? With a massive onslaught of unreported campaign donations in the form of campaign promotion on cable news.

Try not to lose sight of the fact that Biden is almost entirely bereft of new ideas or solutions. What he is selling is being kinder, gentler, and better than Donald Trump. That bar is so low you have to dig a tunnel to get under it.

What the DNC and the cable networks are selling is a "Unity" effort to oust Trump. Yeah, fine. One thing they want is Trump out, but you can be sure they want to consolidate Democratic power in the process.

While Bernie Sanders has proven far more adept at stirring crowds, building a movement, and generating donations, Biden is still sold like snake oil around the clock by the cable networks as more electable. It is as false a narrative as anything promulgated by Trump and his minions.

To this day if you ask a Biden supporter why they back him, they still recite the exact same logic promulgated on cable news, word for word. There's not a thread of policy substance there, nor do Biden's DNC masters want there to be. Biden will, in effect be a DNC puppet. The priority will be protecting the Democratic Party's very lucrative relationship with the very same deep-pocketed donors Sanders wants to "take on."

Biden will be a dutiful errand boy for the 1% and if the voters in November figure that out we'll have four more years of Donald Trump " at a minimum. To defeat Trump you need a broad, enthusiastic movement. We have that with Bernie Sanders. The cable news outlets, at the behest of powerful monied interests, are breaking all the rules and spending unlimited cash to defeat it.

Contrary to popular misconception, lemmings do not leap from cliffs to achieve false narratives, but people do. Stop. Turn around. Get back to work.

Related Topic(s): Democratic; Democrats; Joe Biden; Propaganda; Trump, Add Tags
Add to My Group(s)
Go To Commenting
The views expressed herein are the sole responsibility of the author and do not necessarily reflect those of this website or its editors.