Click Here to Remove All Ads
Source: The Guardian
Can an act of violence be called "terrorism" if the motive is unknown? 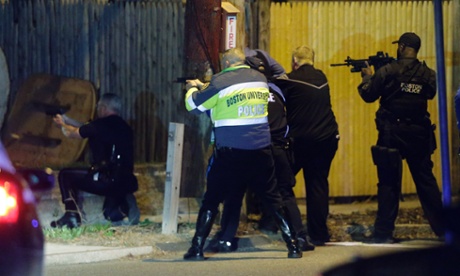 (Image by Unknown Owner)   Details   DMCA
Police officers aim their weapons amid a hunt for two suspects caused officers to converge on a neighborhood outside Boston. Photograph: Matt Rourke/AP

Two very disparate commentators, Ali Abunimah and Alan Dershowitz, both raised serious questions over the weekend about a claim that has been made over and over about the bombing of the Boston Marathon: namely, that this was an act of terrorism. Dershowitz was on BBC Radio on Saturday and, citing the lack of knowledge about motive, said (at the 3:15 mark): "It's not even clear under the federal terrorist statutes that it qualifies as an act of terrorism."

Abunimah wrote a superb analysis of whether the bombing fits the US government's definition of "terrorism," noting that "absolutely no evidence has emerged that the Boston bombing suspects acted 'in furtherance of political or social objectives'" or that their alleged act was 'intended to influence or instigate a course of action that furthers a political or social goal.'" Even a former CIA Deputy Director, Phillip Mudd, said on Fox News on Sunday that at this point the bombing seems more like a common crime than an act of terrorism.

Over the last two years, the US has witnessed at least three other episodes of mass, indiscriminate violence that killed more people than the Boston bombings did: the Tucson shooting by Jared Loughner in which 19 people (including Rep. Gabrielle Giffords) were shot, six of whom died; the Aurora movie theater shooting by James Holmes in which 70 people were shot, 12 of whom died; and the Sandy Hook elementary school shooting by Adam Lanza in which 26 people (20 of whom were children) were shot and killed. The word "terrorism" was almost never used to describe that indiscriminate slaughter of innocent people, and none of the perpetrators of those attacks was charged with terrorism-related crimes. A decade earlier, two high school seniors in Colorado, Eric Harris and Dylan Klebold, used guns and bombs to murder 12 students and a teacher, and almost nobody called that "terrorism" either.

Related Topic(s): Aurora Massacre; Boston Marathon Explosions; Sandyhook Shooting; Slaughter; Terrorism Definition; Terrorism Terrorist Profiling, Add Tags
Add to My Group(s)
Go To Commenting
The views expressed herein are the sole responsibility of the author and do not necessarily reflect those of this website or its editors.