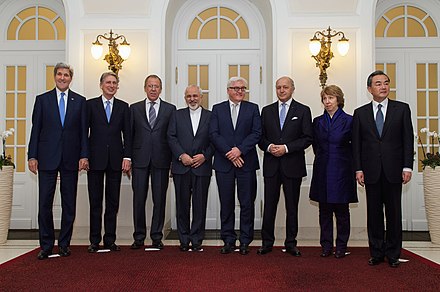 Since he came to power President Joe Biden has done nothing to revive the nuclear agreement with Iran. The JCPOA was breached by the U.S. in 2018 when then President Trump left the deal and renewed a 'maximum pressure' sanction campaign against Iran. For over a year Iran stuck to its commitment under the deal. It then began to gradually exceed some of the technical limits of the deal. Those step were legal under the JCPOA because the U.S. had left the deal. All of them are reversible.

In response to the murder by Israel of Iran's top nuclear scientist Mohsen Fakhrizadeh the conservative parliament passed a law that compels the moderate government under the Iranian President Rohani to further reduce its adherence to the JCPOA deal. As part of this the Iranian government will soon reduce the ability of the international inspectors from the IAEA to observe parts of its civilian nuclear program. As the Ambassador of Iran to the UN announced:

Act of Parliament will be executed on time (23 Feb) and the IAEA has been informed today to ensure the smooth transition to a new course in due time. After all, goodwill brings about goodwill!

The demands are nonsense and have absolutely no chance of being fulfilled.

It is the U.S. that is in breach of the deal. Biden could simply reenter it by lifting the sanctions Trump imposed. Iran had promised that it would follow through by coming back into the technical limits of the deal. But instead of agreeing to that the Biden administration is trying to create a more complicated process by coordinating its negotiation positions with Saudi Arabia, Israel and other opponents of the deal:

Israel's envoy to the United States suggested Tuesday that Israel may not consult with the new administration on its steps to reenter [JCPOA].

Biden has pledged to engage with allies and partners, including Israel, before making any moves to join the deal. But Reuters reports that some Israeli officials believe consulting with the Biden administration could backfire for Israel "by falsely signaling its consent for any new deal that it still opposes."

During informal talks held by the Trump administration with Iran the U.S. had made similar demands as Biden is now making. Iran has rejected all of them.

Iran's missile force, built independently, is a deterrence against potential aggressors in its region. Since the Iranian revolution 43 years ago the country has been under various weapon embargoes. Its airforce has therefore no modern fighter jets. The Arab states in the Gulf Cooperation Council on the western side of the Persian Gulf have in total some 450 modern fighter jets in between them. Additionally the U.S. is keeping at times a hundred or more of its own fighter jets in the region.

Iran has little ability to defend itself from a concerted bombing campaign. The only thing it can do is to threaten a response by extensive missile strikes on regional targets. Its missile force is thus a sheer necessity. To suggest that Iran should limit its missile force is a demand that would leave the country defenseless.

A further prolonging of the time limits for restrictions under the JCPOA deal is likewise not agreeable. The JCPOA was negotiated in a long process during which both sides made concessions. That the U.S. is now coming back to unilaterally demand longer restrictions without offering anything new in return is unreasonable.

Iran will not agree to any negotiation with the Biden regime unless the U.S. returns to the deal first. Its Supreme Leader has spoken:

About the #JCPOA, promises were made by the other side. I am saying one thing: We've heard many promises which were broken & contradicted in practice. Mere words don't help. This time only action! Action! If the Islamic Republic sees action from the other side, it will act too.

In May 2021 Iran will elect a new president. The moderate Rouhani has failed to revive the Iranian economy. Rouhani negotiated and agreed to the JCPOA but was then betrayed by the U.S. with new devastating sanctions which brought more economic pressure. The conservatives in Iran have already won the 2020 parliament elections. (Note: The 'moderates' in Iran are neoliberals. The more hard line 'conservatives' are social-democrats.) The conservatives will likely win the presidency. Currently the former 'hardline' president of Iran Mahmoud Ahmedinejad, pictured below, has the highest voter approval of all potential candidates. Should the religious authorities allow him to run he is likely to win. U.S. diplomacy with Iran will then become even more difficult.

Moon Of Alabama was opened as an independent, open forum for members of the Whiskey Bar community.  Moon of Alabama's purpose is to discuss politics, economics, philosophy and blogger Billmon's Whiskey (more...)
Related Topic(s): Biden Appointments; Iran Nuclear Deal, Add Tags
Add to My Group(s)
Go To Commenting
The views expressed herein are the sole responsibility of the author and do not necessarily reflect those of this website or its editors.