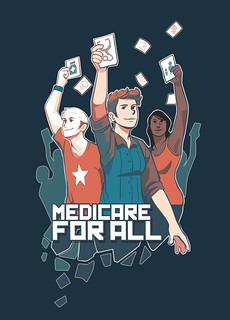 Medicare for All
(Image by juhansonin)   Details   DMCA
>

Ever since the day Bernie Sanders announced his campaign for president -- and long before, in fact -- he has been attacked for his stance on single-payer health care. You can find no shortage of articles in print and online about how it's unrealistic, but far too few of those writers have explored the actual history of Bernie's Medicare-for-All plan -- or the insurance lobby talking points that have made their way back in to our national discussion.

For if they had done a little digging, those writers would know that it isn't Bernie Sanders' plan at all. Bernie is simply calling for what the architects of Medicare had in mind all along. That architect was actually Robert M. Ball, and he faced the same opposition we're hearing today when he and then-President Lyndon B. Johnson wanted to expand Medicare to cover all Americans.

Robert M. Ball was the Commissioner of Social Security through the administrations of three presidents: John F. Kennedy, Lyndon B. Johnson and Richard M. Nixon. He'd worked his way up in the Social Security Administration to become its head guy, spending 30 years of his life there, and then after he retired was tapped by Ronald Reagan to be on the commission that, in 1983, overhauled Social Security to keep it solvent through the Baby Boomer retirement phase.

Medicare was created as an add-on to Social Security, not as a stand-alone program, and so Ball was intimately involved in its creation, as Commissioner of Social Security throughout the Johnson years. He sat in on the meetings with members of the House and Senate, he was involved in the process of writing the legislation, and he was the man charged with helping implement it after LBJ signed it into law on July 30, 1965, and gave the first Medicare cards to Harry and Bess Truman.

Given his cat-bird seat during this entire process, Robert M. Ball felt it important to put his recollections before us, which he did in a 1995 article for the Health Affairs journal, titled "Perspectives on Medicare." "Because I was deeply involved in the development, enactment, and implementation of the [Medicare] program," he wrote, "my recollections may be of use in rounding out the historical record." His article was appropriately subtitled "What Medicare's Architects Had in Mind."

Perhaps the most important thing the drafters had in mind, Ball wrote, was that Medicare was the first step in a more far-reaching solution to America's health care problem:

"For persons who are trying to understand what we were up to, the first broad point to keep in mind is that all of us who developed Medicare and fought for it -- including Nelson Cruikshank and Lisbeth Schorr of the AFL-CIO and Wilbur Cohen, Alvin David, Bill Fullerton, Art Hess, Ida Merriam, Irv Wolkstein, myself, and others at the Social Security Administration -- had been advocates for universal national health insurance. We saw insurance for the elderly as a fallback position, which we advocated solely because it seemed to have the best chance politically. Although the public record contains some explicit denials, we expected Medicare to be a first step toward universal national health insurance, perhaps with 'Kiddicare' as another step."

In his paper, Ball talks about how national health insurance had actually once been advocated by the American Medical Association (AMA), whose leaders "were favorably impressed by the systems that had been established in Germany (1883) and Britain (1911), and several other countries around that time."

This was 1916, he notes, and "ironically, much of the American labor movement in 1916 was opposed" to national health insurance, as "Samuel Gompers, president of the American Federation of Labor (AFL), preferred collective bargaining to political solutions and feared that if workers began leaning on government, they might begin to look generally in that direction, rather than to unions, for help."

A decade later, Ball notes, the AMA and AFL positions had reversed, and stayed that way up to and through the development of Medicare. The AMA was so vehemently against government-offered health insurance that it even hired Ronald Reagan and produced an LP record titled Ronald Reagan speaks out against Socialized Medicine, which would be played at coffee klatches held by doctors' wives to generate letters to Congress against the Medicare plan.

"The AMA's opposition approached hysteria," Ball wrote, noting that during the Truman administration the advocacy of the President for a national single-payer system so frightened the AMA that, "Members were assessed dues for the first time to create a $3.5 million war chest -- very big money for the times -- with which the association conducted an unparalleled campaign of vituperation against the advocates of national health insurance." This was, he notes, "a warm-up for the later campaign against Medicare."

So how did Medicare get passed?

Ball lays it out quite simply: old people were not profitable for the health insurance companies, so they were happy to get them off their rolls' and onto the government's. "[The elderly] used, on average, more than twice as many hospital days as younger persons used but had, on average, only about half as much income. Private insurers, who set premiums to cover current costs, had to charge the elderly much more, and the elderly could not afford the charges."

This set the stage for Medicare, and the health insurance companies were at first enthusiastic about it. But in the final days of the development of the Medicare program, word got out that the people putting it together, including President Johnson, saw it as a program that could easily be modified to cover all Americans by the simple process of lowering the eligibility age, presumably incrementally over a decade or two. This pushed the insurance companies over the edge, prompting on their part a "fervent desire to keep government from penetrating further into the insurance business." Ball adds, "Although most business groups opposed Medicare, the insurance industry was the AMA's main ally."

But because people knew and trusted Social Security, and this was just a health-benefit add-on to that existing program, it was easy to sell in Congress and to the American people. It was one of the most important legislative accomplishments of the Johnson administration.

Related Topic(s): Bernie Sanders; Health Care For America Now; Health Care Universal - Single Payer; Medicare, Add Tags
Add to My Group(s)
Go To Commenting
The views expressed herein are the sole responsibility of the author and do not necessarily reflect those of this website or its editors.