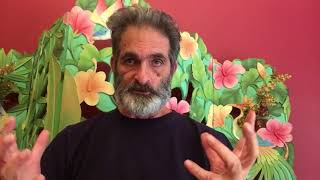 Clarity emerges from the fog; it comes last. The writer finds out why he is doing what he does.

For me, it started with poetry/fiction. At age 11, I read Ray Bradbury's book of short stories, Martian Chronicles. I was stunned by the poetic nature of the work.

At age 44, I began a career as a journalist. I discovered that facts (and how they connected) were fascinating. What began as a lark turned into full-blown dedication. In particular, little known medical truths and crimes attracted my interest.

Still, I felt that poetry/fiction was my deeper calling. Eventually, I saw that my tree had several basic branches. Journalism was one of them. I kept coming back to an exploration of propaganda, cover stories, and false realities.

Propaganda was the invention of worlds for profit, control, and domination. Poetry was the invention of worlds for joy and satisfaction of the untamed creative urge, which has no boundaries. In this civilization, children are trained to grow up contributing to the overall acceptance of deceptive narratives. The creative urge, which would lead to the revelation that Self is infinite, goes begging, and is viewed as an unnecessary risk and dead-end. In other words, everything is backwards.

Over decades of work, I realized how deep the crimes went, and how high and unbounded the creative force could soar. Both branches of the tree were vital.

For the past 19 years, at NoMoreFakeNews, I've presented and fleshed out both vectors in many ways.

I want to thank those who sent condolences on the recent passing of my beloved wife, Laura Thompson. Your words mean a great deal to me.

Related Topic(s): Journalism; Other; Propaganda; Truth; Writers, Add Tags
Add to My Group(s)
Go To Commenting
The views expressed herein are the sole responsibility of the author and do not necessarily reflect those of this website or its editors.