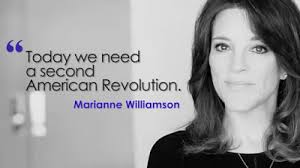 Recently, two very good friends challenged me about supporting Marianne Williamson's run for president. "She has no chance," they objected. "You should be supporting Bernie instead."

Their remarks coupled with today's familiar Gospel account of Jesus' Parable of the Prodigal Son have prompted me to explain myself. The parable particularly as re-created by the French Nobel laureate, Andre Gide, is about a person like Marianne Williamson who eventually identified and escaped the oppressive reality we all take as normal. In Gide's interpretation, Jesus' parable is like Plato's Allegory of the Cave.

So, today I want to describe what we might call the "deep politics" of Marianne Williamson. After all, it's her spirituality (her deep politics) that first drew me to support her candidacy. Because of her more than 30 years of work as a spiritual teacher, we can know her more deeply than any other presidential candidate. And that's important. Our interior lives our thoughts and values are finally shaped by our relationship with what we consider ultimately important. They are shaped by what some of us term "God."

So, let me first talk about Marianne's deep politics and then connect it with Gide's interpretation of the Prodigal Son.

To begin with, I'm supporting Marianne Williamson because she represents the most radical candidate in the field "of thousands," as she often jokes. Using the term "radical" here, I'm referring to its etymological meaning which derives from the Latin word radix meaning "root."

Alone in the crowded field of Democratic candidates Marianne puts her finger on what's really ailing our nation. It's not primarily an economic or military problem. No, at root, it's a deeply spiritual malady. Yes, ours is a spiritual problem!

The problem is that rather than "free and brave," we're all scared out of our wits. We subscribe to values that are 180 degrees opposed to those identified as ultimate by all the world's great wisdom traditions be they Christian, Jewish, Muslim, Hindu, Buddhist or atheistic. At their deepest level, all of those traditions converge identifying compassion rather than fear as the supreme human value.

Ms. Williamson says it clearly: fear (which is the opposite of compassion) has us captive. Fear has us identifying Russians, Chinese, Muslims, immigrants, refugees, LGBT community members, poor people in general, and even (at our borders) children and babies as somehow our enemies fundamentally unlike us and threatening us at every turn.

None of that is true, Marianne says. It's quite the opposite. All of us have far more in common than anything that can possibly separate us. In fact as she puts it "There is really only one of us here." We are not only sisters and brothers, we are really a single person. What I do to you, I do to myself.

That's really the authentic teaching of Jesus, isn't it? That's the meaning of his words, "Love your neighbor as yourself." We must love our neighbor because our neighbor isour self.

As Williamson explains, that conviction is what moved the abolitionists, the suffragettes, the civil rights campaigners and many who brought the Vietnam War to an end. It's no accident, she says, that so many of the abolitionists and suffragettes were Quakers, that Martin Luther King was a Baptist preacher, and that anti-war activists like the Berrigan brothers were Catholic priests. Those are the great heroes of the land we call "America." Like Marianne herself, they all recognized our fundamentally spiritual nature.

So, none of us should say all of this is too idealistic. Instead, we should realize that, in effect, Marianne Williamson is challenging Americans to live up to their faith claims. After all, 70% of us claim to be Christian. Then there are the Jews, Muslims, Hindus, Buddhists I already mentioned, as well as atheists and those claiming to be "spiritual but not religious." As I said, all of those traditions, at their most profound level, converge in calls to liberty, equality, and fraternity.

And that brings me to Jesus' Parable of the Prodigal Son and its connection with Marianne Williamson's deep politics. In what I'm about to say, I'm taking my cue from John Dominic Crossan's book The Power of Parable: how fiction by Jesus became fiction about Jesus. There, Crossan suggests challenging Luke's parable as excessively patriarchal. After all, the story is about a bad boy who realizes the error of his ways and returns home to daddy and daddy's patriarchy with its familiar rules, prohibitions, and tried and true ways of doing things.

Crossan asks, what if the prodigal left home and never looked back? Would he have been better off? Would we be better off by not following his example as described today by Luke by instead separating from the patriarchy and leaving home for good?

Related Topic(s): Compassion; Jesus; Marianne Williamson; Parable; Patriarchy; Presidential Campaign Democratic; Presidential Debates; Spiritual; Spirituality; Sunday, Add Tags
Add to My Group(s)
Go To Commenting
The views expressed herein are the sole responsibility of the author and do not necessarily reflect those of this website or its editors.