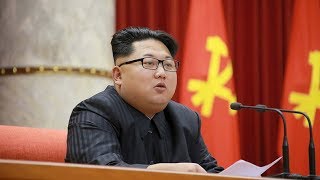 Kim Jong Un has vowed not to conduct any further missile launches or nuclear tests in exchange for a security guarantee from the United States and its allies.
(Image by YouTube, Channel: RT America)   Details   DMCA

Give peace a chance, the song urges.

But the United States won't have it.

Olympic diplomacy seems to be working on the Korean peninsula. After a pair of South Korean envoys visited Pyongyang, they issued a promising communique. "The North Korean side clearly stated its willingness to denuclearize," the statement said. Considering that the Korean crisis and a derpy emergency management official had Hawaiians jumping down manholes a few months ago, this news comes as a relief.

Then comes the rub. The South Korean statement continued: "[North Korea] made it clear that it would have no reason to keep nuclear weapons if the military threat to the North was eliminated and its security guaranteed." [My emphasis]

In other words, the DPRK is saying -- reasonably -- we'll get rid of our nukes but only if you promise not to invade us. That guarantee would have to be issued by two countries: South Korea and the United States.

This would directly contradict long-standing U.S. foreign policy, which clearly and repeatedly states that the use of military force is always on the table when we don't get our way in an international dispute.

Kim Jong-Un has good reasons to be afraid of us. In a speech to the UN President Trump threatened to "totally destroy" North Korea. President George W. Bush declared them a member of the "Axis of Evil"; we invaded and currently occupy Iraq, one of the two other supposed Evildoers. After deposing and enabling the execution of Iraq's president. Last week Bush's UN ambassador John Bolton published a legal argument for nuking North Korea without provocation.

Believe it or not, this is the soft side of U.S. foreign policy.

For decades South Korea has tried to de-escalate its relationship with the North, not infrequently expressing its desire to end formal hostilities, which legally never ended after the Korean War, and move toward the long-term goal of a united Korea under a single government. And for decades the United States has stood in the way, awkwardly trying to look reasonable as it opposes peace. "We do not seek to accelerate reunification," a State Department spokesman said recently.

To say the least.

"South-North talks are inextricably related to North Korea-United States relations," South Korean President Kim Dae Jung said in 2001, after Bush canceled dialogue with the North. The South, dependent on more than 20,000 U.S. troops stationed along its northern border, was forced to suspend reunification talks too.

The Reagan Administration pressured its South Korean ally to break off reunification talks in 1985.

Nixon did the same thing in 1974. After Nixon's resignation later that year, President Gerald Ford opposed a UN resolution to demilitarize the border by withdrawing U.S. troops.

Even Mr. Reasonable, Barack Obama, refused to listen to South Koreans who want peace (and to visit long-lost relatives in North Korea). Celebrating the 60th anniversary of the Korean War Armistice, Obama threatened to loose the dogs of war: "The United States of America will maintain the strongest military the world has ever known, bar none, always. That is what we do." What Obama would not do was allow North and South Korea to sit down and work out their differences. Before talks, Obama said, North Korea would have to denuclearize. After which, of course, there would be no need for talks because, hey, regime change is fun!

Related Topic(s): America; Dogs Of War; Donald Trump; Iran; Korea, Add Tags
Add to My Group(s)
Go To Commenting
The views expressed herein are the sole responsibility of the author and do not necessarily reflect those of this website or its editors.