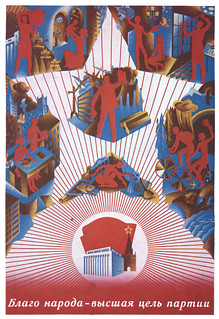 I just read in National Journal how in the 2012 election in Florida, "Obama also benefited from a shift in the Hispanic population toward non-Cubans such as Puerto Ricans, who are more receptive to Democrats."

I'd done a little digging earlier which shows that Russian immigrants tend to vote more Republican. A New York Times article reported that Russian towns "favored Senator John McCain by roughly 55 percent to 45 percent in the 2008 presidential contest, while New Yorkers over all preferred Mr. Obama three to one."
Why? The article suggests that people coming from communist nations see the Republicans as "as more ardent warriors against the kind of big-government, business-stifling programs that soured their lives in the Soviet Union."
The NYTimes article suggests that Russians, like Cuban immigrants and Vietnamese boat people "Having been seared by statism, they see Democrats as drifting toward statism and see that as dangerous for themselves and for the country," said Fred Siegel, a senior fellow at the Manhattan Institute's Center for State and Local Leadership."
And there's another factor. The Russians who came to this country are a self selected group. One forty something Russian immigrant interviewed in the times article said,

"those who preferred state-run economies chose to immigrate to "more socialist societies."

"Russians who immigrated to the U.S. are looking for and believing in core or true capitalist ideals," Mr. Pelin said. "Otherwise they would go to Scandinavian or European countries, or to Canada."

None of these stats are written in stone. A PEW report shows that younger Cubans, many of them born in the US, under 50 are leaning more Democratic than their immigrant parents. The study reports,

"Among Latinos, those of Cuban origin have had some of the highest voter turnout rates. In 2012, 67% of Cuban Americans voted nationally, compared with 48% of Latinos overall. In the 2012 presidential election, the Cuban vote in Florida was split--49% supported Democrat Barack Obama while 47% supported Republican Mitt Romney, according to the national exit poll. Among all Latinos nationwide, Obama won 71% of the vote, compared with just 27% for Romney."

And the NY Times article also suggests that the progeny of Russian immigrants will also lean more Democratic.
Another consideration-- Democracy-- in Russia, democracy ain't what it used to be. I mean that Russians, as well as Ukranians and Lithuanians are no longer as avid in their support of democracy or capitalism. A Pew study reported,

"Two decades after the Soviet Union's collapse, Russians, Ukrainians, and Lithuanians are unhappy with the direction of their countries and disillusioned with the state of their politics. Enthusiasm for democracy and capitalism has waned considerably over the past 20 years, and most believe the changes that have taken place since 1991 have had a negative impact on public morality, law and order, and standards of living."

And when it comes to believing in the power of the people, the change in attitude over twenty years is clearly a shift towards a more top-down way of thinking, as the Pew study reports:

"People in these former Soviet republics are much less confident that democracy can solve their country's problems than they were in 1991. When asked whether they should rely on a democratic form of government or a leader with a strong hand to solve their national problems, only about three-in-ten Russians and Ukrainians choose democracy, down significantly from 1991. Roughly half (52%) say this in Lithuania, a 27-percentage-point decline from the level recorded two decades ago."

"60% of Lithuanians said they were dissatisfied with the way democracy was working; today 72% say so. In Ukraine, unhappiness with the state of democracy has risen from 70% to 81%."

Pew Poll Result
(Image by Pew)   Details   DMCA
The above Pew poll stats suggest to me that the people are seeking a m ore top-down, patriarchal way. Maybe it's because one result of the end of the old
USSR and its order was the freeing of the highly hierarchical and patriarchal Russian Orthodox Church. I'd say that conservatives also seek less democracy and more patriarchal, authoritarian control.
Part of the reason is that the people polled in the PEW study are seeing the same kind of imbalance in wealth and the benefits of capitalism that people are slowly waking up to see here in the US. The study reports,

" 95% think politicians have benefited a great deal or a fair amount from the changes since 1991, and 76% say this about business owners. However, just 11% believe ordinary people have benefited.

They've also figured out that the politicians do not have their interests at heart, with the Pew study reporting, "Just 26% of Russians, 23% of Ukrainians, and 15% of Lithuanians agreed with the statement 'most elected officials care what people like me think.' "
Again and again, we are seeing evidence that the abuses of corporatism in the US are influencing other nations.
The antipathy to government in the US is justified when it comes to cronism, where corporatists are put in charge of agencies, and justified when it comes to the malignant expansion of the intelligence military sectors. Perhaps the right wing's biggest success is to get the most powerful demographic on the right-- married, highly religious white Christians (not so much Catholics)-- to believe that they are doing the right thing when they vote for politicians who dangle red-meat social issues-- like opposition to gun control, gay marriage, abortion and even contraception. They use this bait to get them to back candidates who support regulations and deregulations and laws that hurt their families, their children and their communities. And the immigrants from former communist nations seem to buy the package.
Government CAN be dangerous, when it is taken over by predatory corporatists and militarists, as the US now suffers. Perhaps the answer is for those on the left as well as the Democrats, who are in the middle right, to also start more aggressively critiquing government-- but with a different set of criticisms.
Meanwhile, I'd love to hear your thoughts on the theme of the title-- from immigrants from current or former communist states and anyone else.

Related Topic(s): Authoritarian Personality; Authoritarianism; Cuba; Democracy; Patriarchy; Right Wing; Right Wing Mindset Culture; Russia; Vietnam, Add Tags
Add to My Group(s)
Go To Commenting
The views expressed herein are the sole responsibility of the author and do not necessarily reflect those of this website or its editors.