Reprinted from dailykos.com by News Corpse

After only one day Fox News has already eliminated coverage of the Tea Party Cop Killers in Las Vegas who went on a murderous rampage Sunday. On Monday, Fox's primetime programs (Bill O'Reilly, Megyn Kelly, and Sean Hannity) were silent on the subject except for four sentences on Kelly's show.

On Tuesday morning's edition of Fox & Friends, the curvy couch potatoes failed to mention Jerad Miller and his wife Amanda. Later, on Happening Now, Fox ignored the story entirely. Outnumbered also declined to report on the Millers, despite having guest co-host "doctor" Keith Ablow who has psychoanalyzed every criminal, politician, and other public figure this century (without ever examining, or even meeting, any of them). 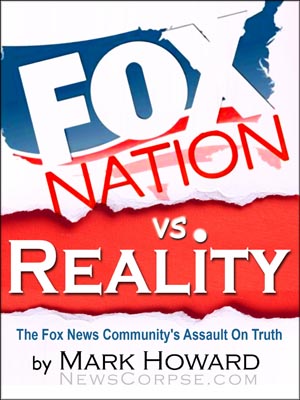 Fox has replaced the Sunday massacre with older stories about the Bergdahl prisoner swap, the Veterans Administration, and Hillary Clinton's book release and presidential aspirations. The producers and editors at Fox News have never been shy about reporting acts of alleged terrorism, even before any evidence has emerged. But for this story they have refused to even refer to the crime as terrorism.

There are some obvious reasons why Fox would skew their reporting and ultimately remove this story from their news coverage. And all of them represent biases that are a long-standing part of what can be called the Fox News Creed: Racism, Guns, Anti-Government, and Tea Party.

Related Topic(s): FOX NEWS; FOX NEWS; Las Vegas, Add Tags
Add to My Group(s)
Go To Commenting
The views expressed herein are the sole responsibility of the author and do not necessarily reflect those of this website or its editors.