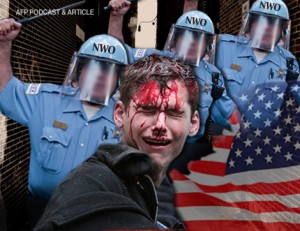 Is the Dallas police shooting a false flag affair in behalf of gun control? Is it the result of a war veteran suffering from post traumatic stress disorder? Is the shooting the beginning of retribution for thousands of wanton police murders of US citizens in the 21st century? Or is there some other explanation?

We will never know. The perpetrator is dead. The authorities will tell us whatever suits the purposes of authority.

We could say that the police have brought this on themselves by their undisciplined and violent behavior toward the public. On the other hand, we can hold the police chiefs, the police unions, the mayors and city councils, the governors, prosecutors, and the Justice (sic) Department responsible for failure to hold accountable those cops who murder and commit gratuitous violence against the public.

When police execute someone, the excuse is always something like this: "He reached under his shirt to his waistband. I thought he had a gun. I didn't want to leave my children fatherless and my wife a widow." The murdered victim's wife and children, if any, are of no consequence.

Conservatives, especially those taught to be fearful of crime, have scant objection to police murders. Their view is always: "The police wouldn't have shot him without cause." The same bias in favor of the police is why conservative jurors always convict.

The liberals tend to interpret the shootings as racism, so they want to combat racism.

The real problem is that public authorities do not protect the public from gratuitous violence. Therefore, hatred and disrespect for the police are growing. Routine murders by police -- several each day, almost all of which go unpunished -- are generating the kind of anger that causes people to snap and to reply to violence with violence.

If the criminal justice system applied also to the police, the police would think twice before they wantonly murder.

Police violence is out of control because mayors, prosecutors, and governors are failing the public by refusing to put a halt to it. According to conservatives, punishment deters crime, but they do not apply this to the police.

Police violence is also out of control because of the revolution in police training which teaches police to protect themselves and to subdue the suspect regardless of cost. A number of former police officers have written to me that the reason they gave up the occupation is that today police are being trained to be killers like soldiers.

If a former police officer or someone knowledgeable about this training would describe it and its history, where it originated and why, I will post it on the website.

Related Topic(s): Dallas Shootings; Police; Training; Violence, Add Tags
Add to My Group(s)
Go To Commenting
The views expressed herein are the sole responsibility of the author and do not necessarily reflect those of this website or its editors.