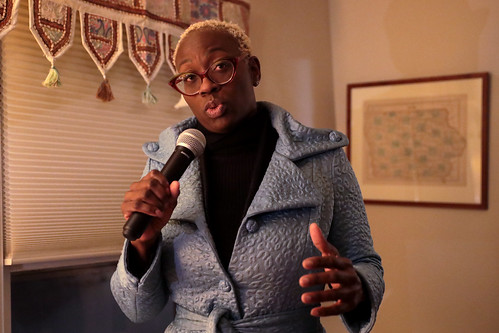 When Hillary Clinton endorsed Nina Turner's main opponent last week, it was much more than just an attempt to boost a corporate Democrat. Clinton's praise for candidate Shontel Brown was almost beside the point. Like other power brokers and the big-money PACs now trying to sway the special election for a vacant congressional seat in northeast Ohio, Clinton is doing what she can to keep the deeply progressive Turner out of Congress.

Time is short. Polling shows Turner with a big lead, early voting begins in two weeks, and Election Day is August 3. What scares the political establishment is what energizes her supporters: She won't back down when social justice is at stake.

That reality was clearly audible Tuesday night during the first debate of the campaign, sponsored by the City Club of Cleveland. "I am running to be a voice for change, to uplift the downtrodden, including the poor, the working poor and the barely middle class," Turner began. "You send me to Congress, I'm going to make sure that we tax the wealthy, make them pay their fair share, and to center the people who need it the most in this district."

The contrast was sharp with Brown, who chairs the Democratic Party in populous Cuyahoga County. The discussion of healthcare was typical: Brown voiced a preference for a "public option," but Turner strongly advocated Medicare for All while calling the current healthcare situation "absurd" and "asinine." Brown sounded content to tinker with the status quo. Turner flatly declared: "The employer-based system, the commodification of healthcare, does not work in the United States of America. Almost 100 million people are either underinsured or uninsured right now."

After Brown emphasized that "we have to be able to compromise so we can get some things done," Turner closed with a jab at those eager to block the momentum of her campaign for Congress: "You need to have somebody that will lead this community, who does have a vision and understands being a partner does not mean being a puppet, that working with does not mean acquiescing to". You will always know whose side I am on."

That's exactly the problem for the party establishment. Its backers know full well whose side Turner is on.

And so, the attacks are escalating from Brown's campaign. It sent out a mailer -- complete with an out-of-focus photo of Turner, made to look lurid -- under the headline "Nina Turner Opposed President Biden and Worked Against Democrats." A more accurate headline would have been: "Nina Turner Supported Senator Sanders and Worked Against Neoliberal Democrats." The Brown campaign's first TV ad, which began airing last month, features her saying that she will "work with Joe Biden" that's different than Nina Turner."

A former editorial page editor of the Cleveland Plain Dealer, Brent Larkin, wrote: "Brown will be a well-financed candidate with deep-pocketed supporters who aren't afraid to play rough. That's because Turner can't be beaten unless opponents plant seeds of doubt about her fitness, convincing voters her harsh criticisms of President Joe Biden would make it impossible for her to get things done for her community. The notion that Biden might punish a constituency important to him because Turner represents that constituency in Congress is far-fetched. During the 2020 campaign, Sen. Kamala Harris was bitterly critical of Biden's civil rights record. Nevertheless, Biden chose her as his running mate, effectively rewarding her with the vice presidency."

Brown's backers are eager to "play rough" because corporate power is at issue. It's not only that Turner crisscrossed the nation, speaking eloquently in support of both of Bernie Sanders' presidential campaigns, serving as a national co-chair during the last one. Powerful backers of the Democratic Party's top leadership -- cozy and enmeshed with corporate America and the military-industrial complex -- realize that "Congresswoman Nina Turner (D-OH)" would significantly increase the leverage of genuinely progressive members of the House. For the Clinton wing of the party, that would be a frigging nightmare.

Related Topic(s): Corporate Democrats; Nina Turner, Add Tags
Add to My Group(s)
Go To Commenting
The views expressed herein are the sole responsibility of the author and do not necessarily reflect those of this website or its editors.