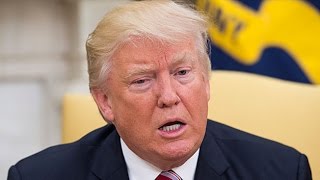 Trump isn't just alienating Republican senators. He's also pissing off the executives of America's biggest corporations, who happen to have a lot of influence over Republican members of Congress because they pay the costs of their campaigns.

Trump's unwillingness to strongly condemn the neo-Nazi's and white supremacists in Charlottesville caused business leaders to stampede off his advisory councils.

Now Trump's cruel plan to end DACA, the Obama-era program that allows unauthorized immigrants who arrived in America as children to remain here, is mobilizing CEOs to make the program permanent.

A business coalition founded by former New York mayor Michael Bloomberg is lining up corporate leaders in at least 15 states to pressure members of Congress.

Meanwhile, a who's-who of more than 400 executives have signed a petition urging Trump and Congress to protect the "dreamers." They include CEOs of Apple, Facebook, Microsoft, Amazon, AT&T, Wells Fargo, Best Buy, Ikea and Kaiser Permanente.

"We're also calling on Congress to finally pass the Dream Act or another permanent, legislative solution that Dreamers deserve," wrote Facebook CEO Mark Zuckerberg in a Facebook post last week. "These young people represent the future of our country and our economy."

CEOs are not moral leaders of American society. They're taking action because Trump's hatefulness is bad for business.

Customers and investors reacted so badly to Charlottesville that the CEOs had to distance themselves from Trump.

Now they're responding to Trump's plan to end DACA because they know that Dreamers are good for the American economy.

Plus many of them are unusually ambitious, and their drive is already adding to the economy. Their parents, who had to be ambitious in order to get into America, seem to have passed on to their kids a particularly strong work ethic.

Dreamers have been among my best students at Berkeley. In recent years I've had many tearful sessions with them, discussing whether they should try for graduate or professional schools when their futures are so uncertain.

Still, more than 72 percent of the top 25 Fortune 500 companies now count Dreamers among their employees, according to FWD.us, which organized the recent petition.

Brad Smith, Microsoft president, wrote in a blog post that at least 27 of Microsoft's employees are Dreamers -- including software engineers, finance professionals and retail associates. Ending the program, he said, would be a "step backwards for our entire nation."

Related Topic(s): Ceos Abandon Trump; Corporate; Daca; Immigrants; Jobs; Trump Idiot-in-chief, Add Tags
Add to My Group(s)
Go To Commenting
The views expressed herein are the sole responsibility of the author and do not necessarily reflect those of this website or its editors.