Reprinted from www.truthdig.com By Patrick Walker and Kevin Zeese 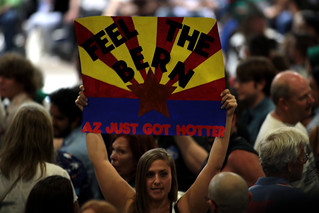 Make no mistake: Settling for Hillary Clinton means abandoning the political revolution that Bernie Sanders has inspired. It means unconditional surrender after overcoming many obstacles in a rigged primary. That's why the revolution must continue through November and beyond, and the Vermont senator's supporters must urge him to keep fighting.

The West Virginia primary on Tuesday illustrates why. After his victory there, Sanders wrote: "There is nothing I would like more than to take on and defeat Donald Trump, someone who must never become president of this country."

Unfortunately, he is unlikely to get that opportunity from the Democratic Party. If Sanders does not remain in the race until the end, he will very likely be helping the Republican candidate. Why? Because nearly half of his voters in West Virginia said they would switch their vote to Trump in November. In fact, we will explain why the best way to prevent Trump from taking the Oval Office would be for Sanders to run on a ticket with Jill Stein, the Green Party candidate.

Sanders' current plan is to get some of his policies into the unenforceable Democratic Party platform and then simply endorse Clinton for president. But because that platform is unenforceable, it will have little value and is belied by the reality that the Democrats serve big business.

Clinton has a long history of representing Wall Street, Wal-Mart, weapons makers and insurance companies. She is in many ways the opposite of Bernie Sanders. The CEOs on Wall Street--and even the Koch oil barons--want her as the nation's chief executive because her vision and political views align so perfectly with their own. The global 1 percent will be relieved if, when the revolution ends, they are still in charge and the oligarchy lives on. We can't let it end that way.

The Corrupt and Unfair Democratic Primaries

Sanders was an independent for more than three decades until joining the Democratic Party last year, and he knew going into the primaries that he would be fighting establishment Democrats who are closely tied to everything he opposes. No insurgent has won a Democratic primary since the current system of superdelegates was put in place in 1982 to stop them.

This year, that anti-insurgent system also included a plan to have a limited number of debates (and independent and third-party candidates are blocked from participating in them). The number of debates dropped from 25 in 2008 to less than half that number this election season--and many were scheduled at times when few voters would be able to watch them. Clinton gave in to pressure for more debates when she thought it was in her interest. Ironically, in each of those face-offs, Sanders at least argued Clinton to a draw, and many saw him as the victor. Thus, the debates did not stop his revolution; in many ways, they grew it.

Another part of the establishment's anti-insurgent plan is to front-load the primaries and caucuses by having 39 states and territories vote all in the month of March. This strategy usually destroys insurgents because they do not have the money to compete with well-funded, big-business establishment candidates. The Sanders revolt overcame that obstacle by raising millions in small donations.

Closed primaries are also a feature of that anti-insurgent plan, disenfranchising millions of voters who don't want to join the Democratic or Republican parties. More than 6 million people were deprived of such a vote in New York and Florida alone.

In addition to these anti-democratic tactics, Debbie Wasserman Schultz, the Democratic National Committee chairwoman, was the national co-chair of Clinton's 2008 campaign. Such an in-the-face conflict of interest shows audacious hubris, and the Democrats clearly thought that they could get away with anything to nominate Clinton. Wasserman Schultz has been consistently biased in Clinton's favor, as indicated by her action to deny Sanders' campaign access to the voter database just before the Iowa primary.

In August 2015, Clinton set up an agreement with 33 state Democratic parties for a joint fundraising agreement with the Hillary Victory Fund. This was before the first primary in a contested nomination. Not only was the DNC headed by a Clinton operative, but state parties were tied to Clinton's fundraising, creating an unbreakable bond between her and the party. This allowed Clinton's wealthy donors to multiply their donations astronomically. "A single donor, as Margot Kidder wrote at Counterpunch, "by giving $10,000 a year to each signatory state could legally give an extra $330,000 a year for two years to the Hillary Victory Fund.

"For each donor, this raised their individual legal cap on the Presidential campaign to $660,000 if given in both 2015 and 2016," Kidder said. "And to one million, three hundred and 20 thousand dollars if an equal amount were also donated in their spouse's name."

Clinton's superdelegates are chairs of key standing committees as well.

Sanders has complained to the DNC that the way these funds have been used violates federal election laws. He also wrote a letter to Wasserman Schultz, saying that she is tipping the scales for Clinton's benefit.

Related Topic(s): Bernie Or Bust; Bernie Sanders 2016 Presidential Candidate; Green Party; Jill Stein, Add Tags
Add to My Group(s)
Go To Commenting
The views expressed herein are the sole responsibility of the author and do not necessarily reflect those of this website or its editors.