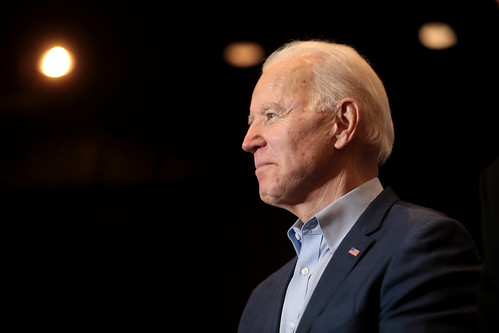 You'd think President Biden and the Democratic Party leadership would do everything in their power to stop Republicans from undermining democracy.

So far this year, the GOP has passed roughly 30 laws in states across the country that will make voting harder, especially in Black and Latino communities. With Trump's baseless claim that the 2020 election was stolen, Republicans are stoking white people's fears that a growing non-white population will usurp their dominance.

Yet while Biden and Democratic leaders are openly negotiating with holdout senators for Biden's stimulus and infrastructure proposals, they aren't exerting similar pressure when it comes to voting rights and elections. In fact, Biden now says he won't take on the filibuster, which stands firmly in the way.

What gives? Part of the explanation, I think, lies with an outside group that has almost as much influence on the Democratic Party as on the Republican, and which isn't particularly enthusiastic about election reform: the moneyed interests bankrolling both parties.

They fear that a more robust democracy would make it easier for the majority of Americans who aren't wealthy to raise taxes on the wealthy to finance all sorts of things the majority may want, from better schools to stronger safety nets.

So at the same time white supremacists have whipped up fears about nonwhites usurping their dominance, America's wealthy have spent vast sums on campaign donations and lobbyists to prevent majorities from usurping their money.

They've already whipped up resistance among congressional Democrats to Biden's plan to tax capital gains at 39.6% up from 20% for those earning more than $1 million. And they're on the way to convincing Democrats to restore the federal tax deduction for state and local taxes, of which they're the biggest beneficiaries.

In recent years these wealth supremacists, as they might be called, have quietly joined white supremacists to become a powerful anti-democracy coalition.

By the same token, white supremacists have quietly depended on wealth supremacists to bribe lawmakers to limit voting rights, so people of color continue to be second-class citizens. It's no accident that six months after the insurrection, dozens of giant corporations that promised not to fund members of Congress who refused to certify Biden as president are now back funding them and their anti-voting rights agenda.

Donald Trump was put into office by this anti-democracy coalition. According to Forbes, 9 percent of America's billionaires, together worth a combined $210 billion, pitched in to cover the costs of Trump's 2020 campaign. During his presidency Trump gave both parts of the coalition what they wanted most: tax cuts and regulatory rollbacks for the wealth supremacists; legitimacy for the white supremacists.

The coalition is now the core of the Republican Party, which stands for little more than voter suppression based on Trump's big lie that the 2020 election was stolen, and tax cuts for the wealthy and their corporations.

Meanwhile, as wealth supremacists have accumulated a larger share of the nation's income and wealth than at any time in more than a century, they've used a portion of that wealth to bribe lawmakers not to raise their taxes. It was recently reported that several American billionaires have paid only minimal or no federal income tax at all.

Related Topic(s): Biden Endorsement; Biden Policy; Democracy; Democracy Decay; Democrats; Filibuster; Voting; White Supremacy, Add Tags
Add to My Group(s)
Go To Commenting
The views expressed herein are the sole responsibility of the author and do not necessarily reflect those of this website or its editors.