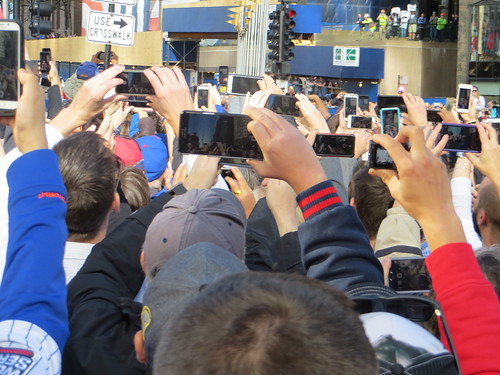 Some 13 unidentified people holding up their cell phones

There is something that continues to gnaw at this writer. Why many/most Americans seemingly remain intentionally in denial or oblivious of what their country has done and is doing in the world.

It feels surreal at times being in the midst of people fixated on their Smartphone's seemingly oblivious to even what's around them-never mind what's happening in the larger world.

I've traveled recently to the San Diego area. Also in the last year to Connecticut, Massachusetts, New York City and Long island, Pennsylvania, New Jersey, Central Florida, South Carolina, Ohio, Indiana to my own Middle-Atlantic Maryland and Virginia. Though the accents may be different their behaviors are similar particularly the fixation with that electronic gadget in front of their faces.

Other than my direct conversation with a friend in a restaurant and the one time sitting next to a stranger on a train, these were the only times discussion of issues or problems facing this country were brought up, in both instances initiated by me. Overhearing others by virtue of being in close proximity to them in those same public spaces seemed to reveal nothing of consequence.

I have an hypothesis why many/most Americans remain in denial or oblivious to their country's policies and actions in the world. Cognitive dissonance would result, a psychological term indicating "mental discomfort experienced by a person...triggered by a situation in which a person's belief clashes with new evidence perceived by the person."

In other words if they let themselves face something contrary to what they have come to believe-from all the propaganda they've been indoctrinated with since early childhood-would turn their world upside down, take the rug from under their feet.

So they simply avoid the unpleasantness cognitive dissonance would bring.

But for those willing to face a few truths about this country let's take a brief glimpse into some of the American "history" we were taught in our schools:

Think of "manifest destiny" -at least how this writer distinctly remembers it-basically the "natural" process of the country's western expansion to the Pacific. That the expansion was really stealing the lands of the indigenous Indian peoples and through a provoked war with Mexico expropriating a third of that country of what is now California, Nevada, New Mexico, Utah, Arizona and part of Colorado. What we were taught was nothing more than a false white wash of history-something one learned long after formal schooling ended.

Of course demonizing and depicting the indigenous people as "savages" made it easier to reconcile the "stealing" of their lands while encouraging white pioneering Americans to settle on those lands. And besides the Indians weren't Christian's and didn't "own" the land. Sometimes our government decided to get a few Indian chiefs to sign a peace treaty-all broken by "official" Washington in due time-then put the survivors of the genocide on "reservations"-essentially gulags-on land much of it not arable.

Then there's America's legacy of slavery, the bondage of black peoples brought here in chains, families sold and separated and on whose backs was the economic and physical development of this country.

Where is the "official" recognition of these facts or reparations paid to their ancestors? None given.

All of it white washed, forgotten, no "official" apology necessary.

Retired. The author of "DECEIT AND EXCESS IN AMERICA, HOW THE MONEYED INTERESTS HAVE STOLEN AMERICA AND HOW WE CAN GET IT BACK", Authorhouse, 2009
Related Topic(s): American Culture; American Hypocrisy; American Republic; American Schools; Denial; Government; People; Propaganda; Truth; World Issues, Add Tags
Add to My Group(s)
Go To Commenting
The views expressed herein are the sole responsibility of the author and do not necessarily reflect those of this website or its editors.