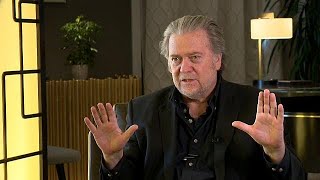 Former Donald Trump chief strategist and 2016 campaign manager Steve Bannon has become a neo-Nazi frequent flyer. Bannon established his organization, known simply as "The Movement," with the help of some far-right Belgian politicians. In a worrying trend, The Movement is forging close ties with far-right parties and politicians around the world, including Brazil's incoming president, Jair Bolsonaro, an admitted admirer of Adolf Hitler.

"The Movement," a secretariat of neo-Nazi and fascist parties is headquartered in Brussels in the same suburban Brussels estate that houses the far-right PartiPopulaire, which is led by Mischaël Modrikamen. Modrikamen was the only Belgian political leader to have endorsed Trump in 2016. Modrikamen also rejects a Palestinian state and his party refers to the West Bank by its Israeli names, Judea and Samaria.

Modrikamen's association with Bannon is emblematic of the current alliance between the Israeli right-wing political establishment and fascist and neo-Nazi parties around the world. Modrikamen's Jewish father, Marcel, was arrested in Belgium at the age of 16 by the Gestapo for being a member of the Belgian Resistance to Nazi occupation. While many neo-Nazi parties support the right-wing government of Israel and the Jewish settlers in the West Bank, they launch anti-Semitic attacks against Jewish targets in their home countries. This paradox was satirized by a cartoon in the Belgian weekly, Le Vif. The cartoon shows Bannon, surrounded by flies, telling a puzzled Modrikamen, "First, we de-Jew Europe."

The "strange bedfellows" accommodation is reminiscent of the concordat established between Ze'ev Jabotinsky's and Naftali Lubenchik's "Revisionist Zionist" of the 1930s and 40s and Nazi Germany. The Lehi movement, also known as the Stern Gang, favored a Revisionist Zionist alliance with Adolf Hitler to drive the British out of the Palestine mandate territory. The Lehi Movement later morphed into the present-day Likud Party of Israeli Prime Minister Binyamin Netanyahu. In late 1940, the Lehi met with a Nazi diplomat in Beirut to discuss increased Jewish immigration from Europe to Palestine, in contravention of British caps on immigration to the mandate territory. The German diplomat, Werner Otto von Hentig, an admirer of Zionist leader Chaim Weizmann, managed to convince Hitler to remove all obstacles to increased Jewish migration from Europe to Palestine via Yugoslav and Greek ports. This was known as the Haavara (Transfer) Agreement. Von Hentig later became an adviser to the Saudi royal family.

The primary goal of The Movement is to upend next year's elections for the European Parliament. Because national laws in nine European Union countries ban the infusion of foreign cash and in-kind donations of support to political campaigns, including the campaign advice that Bannon's Movement is offering, Bannon must carry out his work on the fringes of the laws. Although Bannon's organization is based in Brussels, he sees the UK, which will soon depart the EU, as the best base of operations from which to launch his "Fourth Reich" alliance of fascist parties on the European mainland. Bannon's political infrastructure in Britain centers around anti-European Union UK Independence Party founder Nigel Farage and Farage's one-time chief adviser, Raheem Kassam.

Four EU countries that allow foreign campaign help--Finland, the Netherlands, Sweden, and Denmark--are where Bannon is concentrating his efforts to elect far-right candidates as Members of the European Parliament (MEPs). Bannon has established a working relationship with the governing Fidesz Party in Hungary; Matteo Salvini, the Italian Interior Minister and leader of the League party; Dutch Party of Freedom leader Geert Wilders; the far-right Vox party in Spain; Flemish nationalist Vlaams Belang leader Filip Dewinter; the National Rally of Marine Le Pen in France; and the governing Law and Justice of Poland. Bannon has established links with the Italian fascist party, Brothers of Italy, and its leader, Giorgia Meloni. Bannon has also forged ties with far-right politicians in Switzerland, which is not an EU member, and far-right white Afrikaner groups like the Suidlanders.

Right-wingers, some the children and grandchildren of the white Rhodesian diaspora around the world, others neo-Nazi and white supremacists, are championing a return of white minority rule to Zimbabwe, the former white-ruled Rhodesia. Slogans like "Make Zimbabwe Rhodesia Again" are appearing on social media. Bannon also has links to the resurgent Rhodesian diaspora movement.

Although the United States and Britain have laws preventing foreign cash infusions into their political campaigns, Bannon and his associates, including British right-wing businessman Arron Banks, were able to skirt those laws. In 2015, Bannon was able to funnel money and assistance to Banks's Leave EU campaign. The vehicle was Bannon's and the Mercers' Cambridge Analytica. The UK-based Cambridge Analytica and its sister firm, SCL Elections, both defunct, are under investigation by Britain's Parliament, National Crime Agency, and the UK Electoral Commission for illegally laundering foreign funds into the Brexit campaign in 2015 and 2016. Similarly, Cambridge Analytica is under investigation by U.S. Justice Department Special Counsel Robert Mueller for acting as an interface between the Trump campaign and foreign interests.

In recent weeks, Bannon has spoken at the Oxford Union in England, despite Oxford University protests that saw picket signs bearing the messages "Fascists Not Welcome," "Racist Bannon Not Welcome Here," "Steve Bannon Out of Oxford," and "Kick Racism Off Our Campus." Earlier this month, Bannon appeared at a debate in Toronto, sponsored by the Aurea Foundation, a charitable organization established by Barrick Gold founder Peter Munk. Protesters in the audience unfurled a banner that read, "No Hate. No Bigotry. No Place for Bannon's White Supremacy."

Bannon was also invited to speak at the News Xchange conference in Edinburgh. When she discovered that Bannon was one of the conference speakers, Scottish First Minister Nicola Sturgeon withdrew from participation in the event. Bannon was greeted by protest signs, such as "Nae Nazis."

Where Bannon is obtaining the funds to travel throughout Europe, pushing his fascist movement, has many governments inquiring about his funding sources. Ironically, Bannon claims a large portion of his personal fortune arises from his owning partial rights to the sitcom Seinfeld, a program whose Jewish actors and characters might seem anathema to Bannon's friends in the neo-Nazi movement.

Bannon was a key player in the former election manipulation firm, Cambridge Analytica, which was behind the malfeasance involved in the 2016 Brexit referendum in the United Kingdom and the 2016 U.S. presidential election. Bannon also co-founded the right-wing Breitbart News in 2006. Cambridge Analytica and Breitbart received financial support from billionaire hedge fund tycoon Robert Mercer and his daughter, Rebekah Mercer. Bannon's Belgian partner's wife, Yasmine Dehaene, serves as secretary general of her husband's Parti Populaire. She was also executive director of the alliance of far-right parties in the European Parliament, the Alliance for Direct Democracy in Europe (ADDE). Campaign financing violations and in-fighting within the UK Independence Party of Trump's and Bannon's colleague, Farage, saw the ADDE ultimately collapse.

In December 2016, a little over a month after Trump's election, Dahaene was in Israel,along with her husband, to speak at the second Jerusalem Leaders Summit, an invitation-only event. The first summit, in 2015, also featured Dahaene and her ADDE as participants, along with the right-wing Heritage Foundation of the United States. The Modrikamens are frequent travelers to Israel.

It seems unlikely that Bannon's operations in Europe and his high-cost travel--involving private planes, chauffeured vehicles, and expensive luxury hotels--to Paris, London, Rome, Venice, Lyon, Prague, Edinburgh, and other cities are being underwritten by partial royalties from Seinfeld re-runs. The Mercers claim they cut Bannon off after his stint as Trump's chief strategist in the White House. There are reports that Trump, who calls Bannon "Sloppy Steve"--a reference to Bannon's often unshaven and unkempt appearance--still communicate via the phone. It is also widely believed that Bannon continues to have an interest in the follow-on companies to Cambridge Analytica, which include Emerdata and Auspex International. Although there are multiple denials by the principals, Bannon and his election manipulation associates, who have monetized psychographic data mined from social media platforms like Facebook, Twitter, and Google, are believed to have played a part in the electoral wins of Bolsonaro in Brazil and Prime Minister Imran Khan in Pakistan.

Many Americans and Europeans seem to believe that Bannon is a mere caricature of an obese modern-day Hermann Goering. He is much more dangerous. The "Movement" he represents has financial links going back to the U.S.-run "rat lines" that spirited Nazis out of Europe, including places like Germany, Estonia, Latvia, Ukraine, and Yugoslavia, and ultimately to South America, Canada, and the United States. Many settled in Bannon's native southern California, where they became active in the right-wing "Captive Nations" movement that allied with far-right groups like the John Birch Society and Young Americans for Freedom. While there may not be lost "Nazi gold" financing Bannon's operations, there are generational links to the old Nazis who are assisting Trump's former "brain." One of these is Sebastian Gorka, the Hungarian-British-American who worked with Bannon at the White House before both were fired. Gorka holds the Hungarian Order of Vite'z, a medal awarded by the pro-Nazi regime in Hungary to Hungarians who fought with the Nazis against the Allies in World War II. Gorka's father, Paul Gorka, also holds the order.