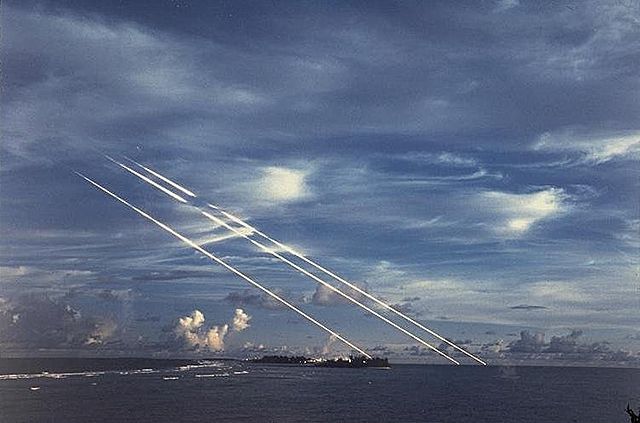 On July 6, CNN reports, "President Donald Trump chided North Korea for its recent missile tests, saying it is 'behaving in a very very dangerous manner.'" Particularly motivating Trump's expression of angst was this week's test of the Hwasong-14, which the North claims (and the US seems to believe) is "capable of hitting any part of the world, along with nuclear weapons."

But since Trump wants to talk about dangerous behavior, let's.

Kim Jong Un's regime has, in recent months, test-fired a handful of missiles harmlessly into the ocean.

Only two months ago, Donald Trump ordered the firing of 59 missiles at military bases situated on the territory of a sovereign nation with which the US is not at war (Syria).

The US government is worried that the North may be close to developing the launch capability to hit the US with one of its 13-30 atomic fission weapons boasting explosive yields of up to the equivalent of 30 thousand tons of TNT.

The US, by the way, possesses nearly 7,000 nuclear weapons with yields of up 1.4 million tons, and 450 Minuteman 3 ICBMs to carry them. It's also the only nation on Earth that's ever used atomic or nuclear weapons in war.

North Korea invaded South Korea in 1950 and hasn't invaded another country since.

How many countries has the US invaded since then? There's not room here to list them all, but right off the top of my head I can think of six just since 2001 (Afghanistan, Iraq, Somalia, Libya, Yemen, and Syria). The US maintains military bases in more than 70 countries around the globe.

North Korea's army numbers nearly a million, armed with obsolete weapons and equipment, who haven't been tested in combat for nearly 65 years.

The US military boasts 1.3 million active duty troops, with state of the art weapons and equipment, who've been hardened by a decade and a half of near-continuous combat deployments.

Who's that you called dangerous, President Trump?

It's true that the North Koreans have been working hard to develop nuclear weapons and a long-range missile capability. Who can blame them? Saddam Hussein and Muammar Gaddafi gave up their nuclear weapons programs under pressure from the US government, which then proceeded to overthrow and kill them. Apparently Kim Jong Un would rather die of old age than from making the mistake of trusting Donald Trump.

Related Topic(s): North Korea; Trump Presidency, Add Tags
Add to My Group(s)
Go To Commenting
The views expressed herein are the sole responsibility of the author and do not necessarily reflect those of this website or its editors.