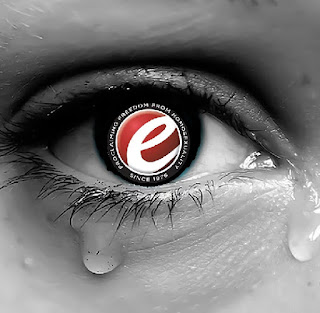 Sometimes a blogger runs into a bit of, shall we say, ironic serendipity regarding the news everyone expects him to cover. Yesterday morning I was playing the song that catapulted Connie Francis to pop stardom, "Who's Sorry Now," when I came across the news that Exodus International, the world's largest "ex-gay" and pray-away-the-gay ministry was closing its doors.

And President Alan Chambers issued an apology to the LGBT Community.


The closing of Exodus International, at a time when "reparative therapy" is being banned for minors in some states, at a time when the Supreme Court is about to issue to important rulings concerning gay marriage, at a time when the Christian Right is screaming that homosexuality is a "choice," is crucial in today's bloodiest culture war.

An apology after 41 years of literal torture, after many suicides, after thousands of people having been displaced and disowned (especially during the age of AIDS), after countless harangues from the pulpit about "change is possible through the grace of Jesus Christ" (the logo states "Proclaiming Freedom From Homosexuality Since 1976"), is an apology even meaningful?

Although Exodus claims that it will reverse course in its new ministry - helping gays to assimilate themselves into an accepting Christian community, some people are very wary about the turnabout:

It's good that Exodus is apologizing, because they've caused a lot of damage to gay people, said Pastor Greg Bullard of Covenant of the Cross church in Madison, Tenn.


"I understand they're doing the apology tour, but they're still not saying it's OK," Bullard said. "They've borne false witness. They've told people they could change things, things they could never change because it's imprinted on them as something they are.

"Their theology is still warped," he said.


Yes, Chambers still says it's a sin (albeit no worse than, say, swearing), but it's more innate - kind of like Original Sin - and unchangeable.

Rushing To Fill The Gap.

And while Wayne Besen of Truth Wins Out applauded Chambers' statement, he was quick to report that another ministry has been waiting in the wings to fill the gap in the ex-gay movement:

In response to Exodus's movements of late, hardcore fundamentalist "ex-gay" figures have moved to create their own new group, the Restored Hope Network, which is chaired by Anne Paulk, the estranged wife of John Paulk, the former poster-boy for the "ex-gay" movement who now admits that he is an openly gay man. Restored Hope's co-founder, Andrew Comiskey, has claimed that "Satan delights in homosexual perversion," which shows that this new group is committed to doing as much as or more damage than Exodus ever did.

The mea culpas of Exodus, International may not be able to slow down the onslaught of such groups as Family Research Council and NARTH (National Association for Reparative Therapy of Homosexuality, currently fighting in California courts concerning the state's ban on reparative therapy for minors). They certainly think that they have experienced treason from a group that is not "truly Christian." 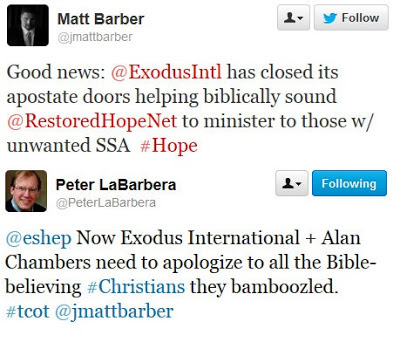 Tears Are Not Enough

Just as tears from a Pope at Jerusalem's Wailing Wall did not exonerate 1500 years of Christians persecuting Jews, one tearful message of a (now) ex ex-gay does nothing to eradicate the pain and loss caused by a movement to change the innate. Chambers, of course, realizes this:

Never in a million years would I intentionally hurt another person. Yet, here I sit having hurt so many by failing to acknowledge the pain some affiliated with Exodus International caused, and by failing to share the whole truth about my own story. My good intentions matter very little and fail to diminish the pain and hurt others have experienced on my watch. The good that we have done at Exodus is overshadowed by all of this.

But in the exodus from Exodus, Chambers will fail to take on the powers that will continue to cause the pain: like a remorseful little puppy, he will slink penitently away to hide in a new "ministry."

He should at least take a few other "ex-gay" organizations with him.

Rev. Dan Vojir is has been writing/blogging on religion and politics for the better part of ten years. A former radio talk show host (Strictly Books " Talk America Radio Network) and book publisher, Dan has connected with some of the most (more...)
Related Topic(s): Alan Chambers; Exodus International; Homosexuality; Homosexuals; LGBT; Pray-away-the-gay, Add Tags
Add to My Group(s)
Go To Commenting
The views expressed herein are the sole responsibility of the author and do not necessarily reflect those of this website or its editors.