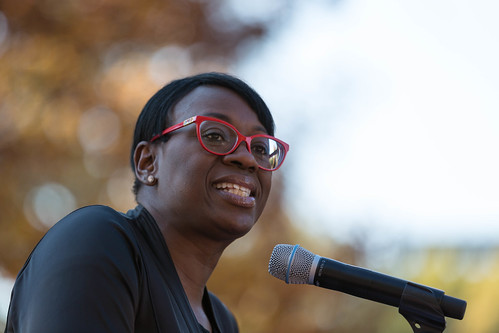 Nina Turner is very scary -- to power brokers who've been spending big money and political capital to keep her out of Congress. With early voting underway, tensions are spiking as the decisive Democratic primary race in northeast Ohio nears its Aug. 3 finish. The winner will be virtually assured of filling the seat in the deep-blue district left vacant by Rep. Marcia Fudge when she became President Biden's HUD secretary. What's at stake in the special election is whether progressives will gain a dynamic champion in the House of Representatives.

For the Democratic Party establishment, the specter of "Congresswoman Nina Turner" is alarming. The former national co-chair of the Bernie Sanders 2020 presidential campaign has a proven capacity to stir fervent energy on the left around the country. Her ability to inspire at the grassroots is far beyond what mainstream party leaders can do.

All politics is local when the votes are finally counted -- but in the meantime, this contest is a national clash of political forces. Turner's endorsements include 15 progressive House and Senate members along with numerous left-leaning organizations. Her main opponent, Shontel Brown, has supporters who include the upper ranks of Democratic Party leaders as well as corporate heavy hitters.

Hillary Clinton's mid-June endorsement of Brown was later eclipsed by the third-ranking House Democrat, majority whip Jim Clyburn. He recorded a TV ad for Brown with a swipe at Turner while identifying himself as "the highest-ranking African American in Congress." In the process of throwing his political weight against Turner -- who is a strong advocate of Medicare for All -- Clyburn didn't mention his exceptional record of receiving hefty donations from the pharmaceutical industry.

Last fall, a newspaper in his home state of South Carolina, the Post and Courier, spelled out details under the headline "Clyburn Has Taken More Than $1 Million in Pharma Money in a Decade, Far Surpassing Peers." The paper reported that Clyburn "has collected more in the last decade from powerful political action committees attached to the pharmaceutical industry than anyone else in the House or Senate." Clyburn has been vocally in tune with his benefactors, warning against Medicare for All and "socialized medicine."

That Clyburn would try to undercut Turner's campaign is logical, especially given her emphatic support for Medicare for All. Likewise, one of her major campaign planks -- calling for "environmental justice" and "re-inventing our energy and transportation systems through a Green New Deal" -- would hardly appeal to the fossil-fuel mogul who is the biggest funder of the Democratic Majority for Israel super PAC, now intervening with huge ad buys to defeat Turner.

The megadonor behind that intervention is "an oil and gas executive who belongs to a billionaire family," the Intercept pointed out days ago. "Stacy Schusterman, heir and chair of Samson Energy, a fossil fuel company that owns at least 11 oil and gas wells in Wyoming, donated $1.55 million to Democratic Majority for Israel in 2019 and 2020, a super PAC that has in turn spent over $660,000 on ads" supporting Brown and attacking Turner.

Related Topic(s): Nina Turner; Ohio Politics; Ohio Primary, Add Tags
Add to My Group(s)
Go To Commenting
The views expressed herein are the sole responsibility of the author and do not necessarily reflect those of this website or its editors.