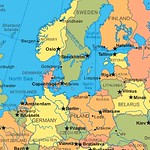 Large-scale NATO manoeuvres "Iron Wolf 2019" (Gelezinis Vilkas 2019) in Lithuania started on 8 June. Military personnel from the USA, the Netherlands, Norway, Poland, Germany, Great Britain, Belgium, Denmark, the Czech Republic and Estonia also take part in addition to the Lithuanian soldiers. Some of them are members of the forward-based NATO battalion stationed in Lithuania.

More than 1000 units of military equipment are involved in the exercises, according to the Chief of the Lithuanian Army.

"Iron Wolf 2019" are the largest national military exercises in Lithuania this year.

NATO military manoeuvres are constantly held in the Baltic countries. This year there will be even more exercises. Manoeuvres are carried out practically without breaks and days off.

In January tactical exercise was held in Estonia. Joint exercises of Latvia and the USA "Dynamic Front" were held in March. Several manoeuvres took place in May: "Hammer of Fury", "Summer Shield" and "Quick Response", in which amphibious operations were worked out with the US troops.

In late May, the largest military exercises "Spring Storm" were held in the republic. They were attended by nine thousand soldiers of the countries of the Alliance.

In early June, NATO ships entered the Baltic Sea as part of the "Baltops" exercises in order to training joint combat operations. They will be held two months, and the forces of Lithuania, Latvia, Estonia, Poland, Belgium, Germany, Denmark, Spain, the Netherlands, Norway, Portugal, Romania, Great Britain, the USA, Turkey, France, and also Finland and Sweden will take part in them.

The increase of number of soldiers on the territory of Lithuania takes place against the background of the already familiar statements about "Russian aggression." After coordination with the United States, the government of the Baltic States approved the conduct of the manoeuvres. The country's leadership also constantly urges NATO and the United States to increase the military contingent on its territory.

In NATO only the Baltic countries and Poland directly border with Russia, which means that it is most logical for the US to "train" in this region.

Riga, Vilnius and Tallinn have been propagandizing the "Russian threat" for so long time and they themselves believed in it. Now it has become a kind of Baltic socio-psychological complex, which has further intensified in connection with the Crimean events of 2014.

Territory of the Baltic countries is not interesting for Moscow. The Baltic States haven't got even a good economic potential, as it was 50 years ago. The economies of the countries are degrading and people are increasingly leaving in Europe. At the same time, mass psychosis among the Baltic authorities does not fade away for a minute.

In response to the constant war games on its borders, Russia together with its allies is conducting its own exercises. This year Russian and Belorusian troops will improve their defensive combat skills in the central part of Russia. The exercise will take place from 13th to 19th September. Observers from all interested countries are also invited to it. Such steps indicate openness and transparency of military manoeuvres, which happens very rarely.

Related Topic(s): Allies; Government; Military; NATO; Transparency, Add Tags
Add to My Group(s)
Go To Commenting
The views expressed herein are the sole responsibility of the author and do not necessarily reflect those of this website or its editors.