This essay explores how Donald Trump uses fake attacks, phony fights, and public condemnation against those with whom he conspires to rule: the classic example is his attacks on Goldman-Sachs, and I then use this example to illuminate the fake feuds with the Deep State, the CIA, and the FBI.

In understanding how he operates, we are able to see who is projecting the fake images that the public and media is expected to take as real, as in Plato's Allegory of the Cave. Those who detect the deception are then called out for being fake news. This modus operandi has allowed the Deep State, with Donald Trump as figurehead, and ultimately controlled by Wall St, to destroy the last remnants of democratic government and create a full-blown American version of fascism, the marriage of state power and corporate wealth, now not only controlling the incoming regime but occupying the White House.

Let's begin with the Trump attacks on Goldman-Sachs, from Wall Street on Parade:

"During the primary campaign, when it emerged that Trump's opponent Ted Cruz had received a loan from Goldman Sachs, Trump said that Cruz was 'owned' by Goldman Sachs."

"During his political campaign, Donald Trump repeatedly railed against Wall Street with a specific focus on Goldman Sachs. In the final days of his campaign, Trump released an advertisement"that featured his opponent, Hillary Clinton, shaking hands with Goldman Sachs CEO Lloyd Blankfein. As the image flickers on the screen, Trump does a voice over, stating: 'It's a global power structure that is responsible for the economic decisions that have robbed our working class, stripped our country of its wealth, and put that money into the pockets of a handful of large corporations and political entities.' As the ad ends, Trump bares his soul: 'I'm doing this for the people and for the movement and we will take back this country for you and we will make America great again'."

In these attacks, Trump paints Goldman-Sachs as the enemy, in alliance with his rival, Hillary Clinton. If he can equate Clinton to Wall St (not hard to do, in fact: Wall St. supports whoever they think will have nominal power), he can defeat her on his (fake) populist appeal to ordinary people. 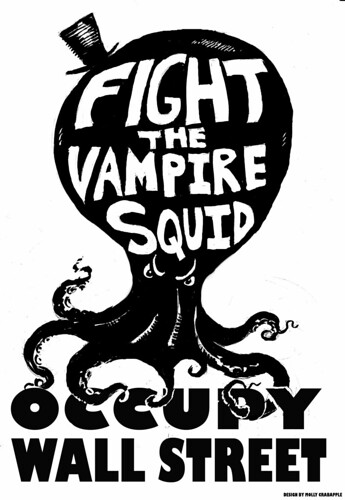 Here is the epic takedown of Goldman Sachs, by Matt Tabbai:

""The world's most powerful investment bank is a great vampire squid wrapped around the face of humanity, relentlessly jamming its blood funnel into anything that smells like money. In fact, the history of the recent financial crisis [2008], which doubles as a history of the rapid decline and fall of the suddenly swindled dry American empire, reads like a Who's Who of Goldman Sachs graduates."

So that was the attack and link to Clinton. Now to the reality, which shows that this was a charade.

Let's look at the fact that Trump is deeply indebted to Wall St and Goldman-Sachs. Marcketwatch reports:

" Trump's debt is held by more than 150 Wall Street firms. The New York Times has reported that Goldman Sachs Mortgage Company holds a loan on an office tower at 1290 Avenue of the Americas, a building that is 30 percent owned by Donald Trump."

"Some of the Trump debt held by Wall Street firms, according to media reports, includes Donald Trump's personal guarantee in the event of a default. The true owners of other Trump debt are shielded behind secretive Limited Liability Corporations""