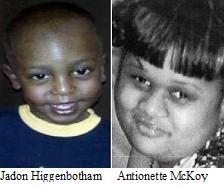 It's not enough to say "we're not all like that."

(Warning: please be advised that the first section of this article chronicles a brutal and horrendous series of events, which, even after suspects have been taken in and charged, is just now coming to light on the national scene.)

Why is it that whenever a heinous crime is discovered to be perpetrated by a person with a fringe-religious background, religious people immediately say "we're not like that?" Either that, or they hide underneath the "not-a-fanatic" cloak of invisibility. I'm sorry, oh righteous ones, but you are not Harry Potter. In fact, as insufferably self-righteous souls, you'd have a hard time convincing people you're not Valdemort.

Responsibility and complicity are words that become fainter with distance, but THEY DO NOT DIE OUT COMPLETELY.

Durham, N.C. - A man is on trial for capital murder after he allegedly shot a 4-year-old boy in the head because he thought the boy might be gay.

That shuffling noise you hear right now is the sound of people, organizations and churches backing away from the central light cast by the atrocious murder.

Peter Lucas Moses Jr., 27, is also accused of murdering a young woman who tried to escape from the house where she had been living with Moses and several other women, who called Moses "Lord." Prosecutors have said they plan to seek the death penalty against Moses. Three of his "wives" are also charged with murder and with being accessories to murder.

"Not-a-cult" can be considered just as much a cloak of invisibility as "not-a-fanatic." The word "cult" fairly drips with the unsightly sweat of "evil." In America, ALL "cults" are demonic: only the thinnest veneer of respect is offered to today's Mormons by "mainstream" evangelical denominations.* So it's not surprising that the word "cult" is used so freely in the case of little Jadon.

Moses and his wives were members of a religious sect called the Black Hebrews, a group that frowns upon homosexuality. According to the

Jewish Virtual Library , The Black Hebrews believe that they are descended from the 10 lost tribes of Israel. They live according to their own special rules of conduct. Polygamy is permitted and birth control is forbidden.

The Black Hebrew movement, however, is not very recent: its beginnings stretch as far back as the mid 1800s - almost as far back as Southern Baptists (!). In 1980, there were an estimated 80,000 Black Hebrews in the U.S. and an estimated 200,000 Black Jews. It has been suggested that technically there are three groups involving African Americans and Judaism: Black Hebrews, Black Jews and Black Israelites. All believe they descended from the 10 Lost Tribes of Israel, with Black Hebrews being the strictest in their social and dietary laws.

So far, the description of the Black Hebrew "cult" makes it seem to be a culture in tune with aspects of both Mormonism and Christianity. But wait...

Sometime in October 2010, prosecutors said to the judge that one of the women told the defendant that Jadon had hit another child's bottom, and Moses retaliated because he thought the boy might be homosexual -- partially because the child's father had left his mother.

Rev. Dan Vojir is has been writing/blogging on religion and politics for the better part of ten years. A former radio talk show host (Strictly Books " Talk America Radio Network) and book publisher, Dan has connected with some of the most (more...)
Related Topic(s): Black Hebrews; Cult; Homophobia, Add Tags
Add to My Group(s)
Go To Commenting
The views expressed herein are the sole responsibility of the author and do not necessarily reflect those of this website or its editors.