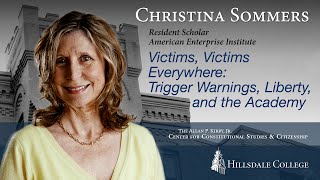 Some readers, both male and female, wondered why I came to the defense of feminist Laura Tanner. Why not, I was asked, let a MeTwo babe experience the name-calling and stress that feminists dish out to men and "women apologists for men"?

Justice is part of the answer. Another part of the answer is that "Western civilization" is creating new victim groups so rapidly that older victim groups are becoming victims of the new. The Tanner case is a case in which a feminist "victim" of male misogyny hasn't the clout of a transgender advocate. It is not clear whether Tanner's persecutor, Kremina Youssef, is a transgender or just an advocate for transgender "victims."

Those who are said to be "vulnerable" actually have all the power. Tanner, who expressed her opinion outside the university that it is not possible to be born into the wrong body and, therefore, a person in a male body is a male, has discovered that her free speech rights are null and void because Youssef is distressed. It is Tanner, not Youssef, who is vulnerable.

Youssef has the power to destroy Laura's career, despite Laura's protection under both the US Constitution and the Civil Rights Act. The creation of "hate speech" has trumped the First Amendment.

Anyone who qualifies as a victim and feels "distressed" by the expressed view of someone else can bring a Title IX civil rights action against the person who caused "distress" by expressing an opinion. In other words, the way America works today, if you can get yourself classified as a victim, you can shut up anyone to whose words you take exception.

When the "vulnerable" have this kind of power, just how Orwellian is it to call them "vulnerable"?"

Zionists created the trick or deception of elevating themselves above criticism by accusing critics of being "anti-Semites" who intend harm to Jews. The success of this strategy has made it attractive to designated "victim groups." Consequently, the First Amendment only protects "victim groups."

Transgenderism institutionalizes lies. In England a medical doctor has been fired, because he refused to call a 6-foot tall bearded man who claimed to be a woman "madam." Let's assume that there are some people who are convinced that somehow they were born into the wrong body. How can these people be distinguished from someone who sees an advantage in claiming to be a different gender? Consider a man who dreams of sports victories but can't successfully compete against other men. How do we know he really thinks he is a woman when he declares himself one and dominates women's sport competitions?

Where does this end? When will trans-species claimants show up? Suppose a person is into beastiality and prefers sex with animals to sex with humans but is frustrated by laws against the practice. What is to stop the person from claiming to have been born into the wrong species?

In the long campaign to normalize homosexuality, which lasted more than three decades, opponents understood that once social and religious norms against sexual deviancy were breached, other forms of sexual deviancy would also be normalized. Today we are witnessing the normalization of pedophilia on the identical grounds on which homosexuality was normalized. For example, a young woman, Mirjam Heine, recently explained to a TEDx audience at a German university that pedophilia is simply another sexual orientation and, therefore, our perception of pedophilia has to change. She said: "According to current research pedophilia is an unchangeable sexual orientation just like, for example, heterosexuality. No one chooses to be a pedophile, no one can cease being one." Just as they alleged about homosexuality, clinical psychologists are claiming that pedophilia is a deep-rooted, unchangeable predisposition from birth.

Related Topic(s): Homosexuality; Innocent Victims; Pedophilia; Racism; Rights; Transgender, Add Tags
Add to My Group(s)
Go To Commenting
The views expressed herein are the sole responsibility of the author and do not necessarily reflect those of this website or its editors.